The first is Blondie: From Honeymoon to Diapers & Dogs: Complete Daily Comics 1933-1935 (IDW Publishing, $49.99). This is the second and last of IDW’s collections of the earliest Blondie strips. The first volume told the story of Blondie and Dagwood’s courtship and subsequent marriage, while this one collects their days as young marrieds. Many of the elements we associate with Blondie debut, including Mr. Dithers, Dagwood’s boss; Herb & Tootsie Woodley, the next-door neighbors; and the “Dagwood sandwich.” 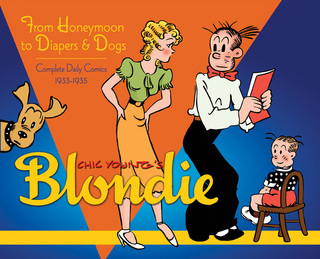 What struck me about this book was that, despite its age and the era it comes from, Blondie herself comes off very well. Originally presented as a blue-collar bubblehead, she evolves into the brains of the family in this volume (while still retaining her showgirl looks and goofy personality; it’s the upending of expectation that’s funny). Dagwood, who had in the first volume the unearned confidence (and incompetency) of someone who grew up in a cocoon of wealth, remains incompetent in this volume, but without the riches and confidence – and therefore becomes the butt of most jokes. This is essentially the model for the strip for the rest of its run, not to mention virtually every dad in every sitcom on every TV show ever produced. Blondie may not be anyone’s idea of a feminist, but feminists should approve: She is clearly the smart one – and the boss.

Keep in mind that this takes place only a few decades after the Victorian age, when the “angel of the house” model for women prevailed. Sure enough, all the women in Blondie are housewives. But Blondie also takes the position a woman continues to be the head of household even after her husband comes home. This “hand the rocks the cradle” concept is still popular today, and it makes me wonder if it was popular in the 1930s, when these strips ran, or if Blondie more or less invented it. 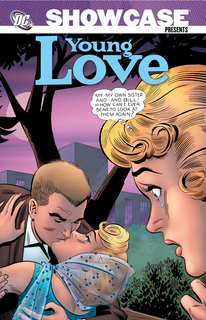 Meanwhile, I had the opposite reaction to Showcase Presents: Young Love (DC Comics, $19.99). This collection reprints Young Love #39-56, more than 500 black-and-white pages of material originally published in color from 1963 to 1966.

Frankly, you don’t have to be a feminist to be absolutely appalled by these stories. Aimed at pre-adolescent girls, Young Love featured helpless, emotional basket cases whose only purpose in life was to please – and eventually marry – a man. Notwithstanding that all their men are insufferable jerks, without any responsibilities in the relationship whatsoever. No, these pathetic, self-loathing women set their cap on a fellow, then tearfully abase and humiliate themselves in scene after scene until these selfish men, for some reason, decide to marry them.

Even the girls of yesteryear eventually rejected this philosophy, with romance comics dying out in the 1970s. For my part, I could only digest Young Romance in small chunks. And the only way I got through it was that every time kissing was involved, I pretended the writer meant “sex.” The stories actually make a lot more sense if you do that, because these girls are absolutely fixated on the act of kissing, going wobbly in the knees at the thought of it.

There is one highlight: “The Private Diary of Mary Robin, R.N.,” described in every issue as an “exciting new feature of the life and loves of a beautiful young nurse in a great metropolitan hospital.” It’s just as stupid as the other stories – this supposedly professional nurse swoons over every male in sight – but the art is terrific. “Diary” was drawn by John Romita Sr., the guy who took over Amazing Spider-Man in 1966. He was the first to draw Mary Jane Watson’s face and full figure, and it was this training in romance books that made you believe MJ’s signature line, “Congratulations, tiger, you’ve just hit the jackpot!”

Most of the art – and virtually all of the stories – are unsigned (I’d guess for career preservation). But there are a couple of bright spots, including art by Don Heck, Gene Colan and Bernard Sachs. Mike Sekowsky, not usually one of my favorites, does the best work of his career here.

As for our history lesson, remember this: Blondie continues to last after 80 years, while Young Love got canceled in 1977. Which model do you think women prefer?

If you're anything like me, it'll be mostly "for worse." I found Young Love virtually painful.

A lot of the stories I identified as Sekowsky were listed as "Unknown" in the credits. But seriously, how can you mistake Sekowsky? Still, I'd be interested in what others think when they look at the book.

YOUNG LOVE: This being the “Golden Age of Reprints,” I already own several collections of straight romance stories (when the originals are good) and parodies (when the originals are bad) and even some originals when the stories aren’t so good, all in color, so I have little interest in in a Showcase edition of more bad romance comics, especially after reading your review. I will keep in mind your tip about how to get more bang (so to speak) for your buck out of reading old romance comics, however (pun definitely intended).

Can't believe they're doing it on the front cover of that Showcase!

Yeah, Dagwood's parents showed up for the Bumsteads' first Christmas as a married couple, as did Blondie's mother (never any mention of a father), and the conflict between the two mothers-in-law fueled the gags. But they never appeared again in this volume, even when Blondie had her baby. (Interestingly, Blondie was at her mother's for the bulk of the foreshortened pregnancy, so she was never depicted pregnant, which I'm sure was the idea. And since Blondie was never shown, neither was her mother, so the mother's last appearance as of this volume was the aforementioned first Christmas.) As I think I mentioned somewhere, Dagwood's boss Mr. Dithers -- I don't think he gets a name in this volume yet -- is a dead ringer for Dagwood's father, and to no one's surprise, fills the same "niche" the father did, of the blustery, exasperated authority figure.

I agree completely, and I wish I'd made that observation in the column proper, because it's so dead on!

Fritzi Ritz and Blondie started out as (sexually promiscuous?) flappers, but just about the time Fritzi’s niece Nancy was introduced, Blondie got married and soon started a family. The change was so abrupt in Blondie’s case I wonder if it wasn’t editorially mandated? Gasoline Alley (which had featured the real-time growth of the foundling Skeezix since 1921) was hugely popular, and the syndicate may have wanted a strip to compete with that for female readers.

When Dagwood first went to work to earn his living, he got a job at his father’s company, but after the one strip which dealt with his first day on the job, that angle was never mentioned again. It took a while for the introduction of Mr. Dithers (who does bear a striking resemblance to Dagwood’s father) as we know him today. For several months Dagwood apparently reports to a variety of generic “bosses,” often off panel.

Another question: Does anyone know if Jay Scott Pike was a pen name for Win Mortimer? There's a number of stories attributed to "Pike" that sure look like Mortimer's work. Several of these stories appear to be inked by Vince Colletta, whose style is hard to miss.

Ithought I posted a-short-comment in this line yesterday but it appear to not Stay?:-(