I have the same problem with the Blue Marvel / Adam (?) character from the Mighty Avengers - fine enough character but I immediately take against him because he has supposedly 'hidden in secret' for decades. I always want to know why that kind of guy will help out 'now' but not during such big events as the 'Secret Invasion' or Kang ruling the heart or...etc etc...

Or, considering the big story coming up right after #128, when the heck is this "Celestial Messiah" that Mantis was supposed to have to save the universe going to actually, you know, save the universe? Where was he to stop Secret Wars. Or Thanos from getting and using the Infinity Gauntlet? Or prevent Onslaught? 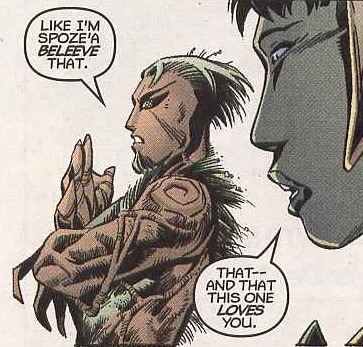 This is Mantis' son, SEQUOIA or Quoi for short AKA The Celestial Messiah.

He hasn't done much.

And Kang never tried to kidnap him!

I'd like to think the guy that's going to save us all would speak better English than "spoze'a" for supposed to.

And why is she still calling herself "this one"? 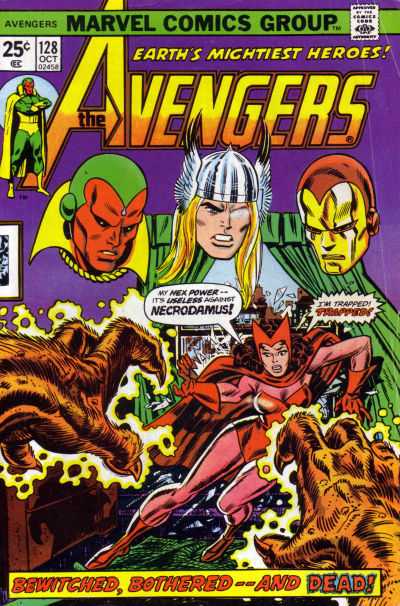 Regarding the Gil Kane cover, heavily refined by Romita I feel, the memo of this being a Scarlet Witch-centric issue obviously got through - and the added detail of the action occurring in her rooms welcome in the design of this cover picture but how come the menacing monster has hairy hands?? No hairy hands are seen inside - so this cover annoys me!

Also, Wanda bleats here, " I'm Trapped! TRAPPED!"  and yet we can clearly spearhead just smashed the glass of the large window behind her and so...couldn't she just....step out the window and escape? D'Oh.

- Side point - regarding this cover, are the floating heads an editorial edict to remind buyers this is a team book and were they added to Jane's original cover design later? I always think the corner roll-call masthead always works wonders with team books to allow covers not to require every team member  be present every issue. The figure of the Vision used in this era presumably served the same purpose but having him on the logo representing the rest of the team makes his floating head superfluous here dosen't it? - another opportunity for a Swordsman cover appearance lost!

The issue opens with all the non-Inhuman characters from FF #150 returning home and being assaulted by a storm!  Naturally, Thor steps up to quell the storm only to find it is magical in nature and he cannot control it.

In a wonderful solo spotlight appearance Agatha Baroness silently waves her arms ( no silly alliterative spells for her!) and then as the storm clears, she crosses her arms and almost playfully smirks, "I suppose many of you would appreciate an explanation." - wonderfully understated.

She goes on to dismiss the FF as no longer needing her now that Franklin is powered down and his parents are back together informing the Scarlet Witch that she knows Wanda wants to up the Witch theme in her name and will help train her.

Everyone then goes their own ways - the Thing tellingly commenting on the relationship between the Vision and...Mantis.

( FF point - why did Medusa stay with the FF at this point? Reed and Sue were back together and they had all just been back to'her place' '?)

Ms Harkness' 'familiar' Ebony the cat mysteriously arrives and the Vision is sent on his way before he can uncharacteristically pour out his heart to Wanda - yeah, As If !

Both Ebony and Agatha fall before this sorcerer leaving Wanda seemingly powerless before him.

Eventually all is well and Wanda wins out - as it is revealed that Ms Baroness was always in control and the entire battle has been a magical trial-by-fire for our Scarlet Witch!

Intertwined with this battle are some more character-beats for Englehart's favourite Avengers.

Swordsman confronts Mantis (again) and this time she does explain her feelings...

"This one hopes you will prove a stronger man than you have been, Swordsman -- for she no longer cares for you."

That is probably the coldest rejection of a loved one in comics!

Although he had been a bit of a wimp for a while, it is difficult not to feel for the Swordsman here. Surely for him there is no recovery here, surely this will mark the end of his Avengers membership.?

Mantis herself walks straight to the Vision's quarters, .."May this one...enter?"

Mantis and Vision discuss their similar lack of history/origin and Mantis effectively throws herself (hussy!) at the android but once and for all the Vision explains his position, reminding us of what he wanted to tell Wanda earlier this issue...

"It's Wanda I love, no matter how irritable she may have been lately. I value you as a friend -- but there can be no more between us."

Everyone needed that clarification but let's not forget - Wanda still does not hear this!

The issue ends with a cliffhanger - a star appears above Avengers Mansion and while everyone asks what that means ( and presumably Jarvis checks for unexpected guests in the stable!) Kang the Conqueror arrives, claiming the star will mark his conquest of earth!

Sal Buscema's art is functional again (Everyone must miss Buckler from FF#150 eh?)

and still has that shining quality to it that I attribute to Joe Statton's influence.

If there was a 'Celestial Madonna - Absolute Edition' like I imagined for the 'Avengers/Defenders Clash' then this issue would have to be included, not just for that last page set-up.

This issue sets up the character positions for the main players before we jump.into the multi-part storyline to come, this shows so much insight to our heroes before the action begins.

So much more then, than 'the-one-before...'   AND - the best appearance of Agatha Harkness since her debut?

I like this issue and think it gets overlooked  - maybe not anymore?

I suppose I could just look it up...

I do hate this predictive spelling !!

I suppose I could just look it up...

(Chuckle!) Now, you're in my ballpark.  For at least the last six decades---since it was how I was taught in elementary school---the serial comma (i.e., the comma before the "and" in a series of items) has been considered optional in American English.  And it's one of the few linguistic options for which I express no strong preference one way or the other.

While I personally employ the serial comma, I have heard good reasons for omitting it.  The best and most rational I heard first from Craig Shutt, who insisted that the commas placed between items in a series take the place of the word "and"; therefore, a comma is not used when the final item is set apart by the word and---because the comma is not replacing "and" in that case.

On the opposite side, however, is the argument that the serial comma eliminates the potential for confusion or misreading that might be caused by the lack of a serial comma.  For example, in the following sentence:

"The persons who taught me the most about acting are my parents, William Powell and Myrna Loy."

Does that sentence refer to four people . . . or three?  Even if one is aware of who Powell and Loy were, and of the fact that they had no progeny, the composition of the sentence makes one step back a bit; whereas, the addition of the serial comma removes the ambiguity:

"The persons who taught me the most about acting are my parents, William Powell, and Myrna Loy."

Two approaches with two different justifications, both with validity.  It's why I don't take a stand on this one.  You can say that "(This option) is the better one because (justification)," and I will say, "You aren't wrong."  That's why the serial comma is optional.

"The persons who taught me the most about acting are my parents, WIlliam Powell, and Myrna Loy."

To my mind, for clarity's sake, I would put another "and" in that sentence:

"The persons who taught me the most about acting are my parents,  and WIlliam Powell and Myrna Loy."

Since Mantis broke up with the Swordsman in a nasty way only to then get rejected by the Vision, you would have to think that she wouldn't be allowed to stay at the mansion anymore, if the Celestial Madonna storyline didn't immediately start!

Englehart gets a lot of credit for Mantis but he really elevated the Scarlet Witch as she would be central to following writers as well.

But didn't he also chain her to the kitchen sink in suburbia with the Vision?

Englehart gets a lot of credit for Mantis but he really elevated the Scarlet Witch as she would be central to following writers as well.

Well he had her become pregnant which started a different kind of adventure.

The whole Leonia, New Jersey phase was the Vision and Wanda trying to live a "normal" life for the first time.