(EDITOR'S NOTE: This column was filed on March 16 for a March 18 release. By the time of release, more comics-related TV and movies had been delayed or canceled due to the coronvirus pandemic. Marvel's Black Widow has been indefinitely postponed, and more of The CW's show's have experienced production delays. By the time you read this, the story will have moved further still.)

March 18, 2020 — The comics-based movie Bloodshot began screening at theaters nationwide March 13, and it’s remarkable. Not the movie, necessarily, though it might be. What’s surprising is the fact that local theaters are screening anything at all.

Yes, I’m talking about COVID-19 and “social distancing.” With virtually all sports canceled, lots of  restaurants shifting to  takeout models, many schools and universities shuttered, local government offices locked up and the list of closed venues and events growing ever longer, there isn’t a lot of “new” to talk about.

For example, I’d love to discuss the aforementioned Bloodshot, based on a popular character at tiny Valiant Comics. But I haven’t seen it. There aren’t many cases of coronavirus confirmed in my area, but why risk adding to the total for a movie? 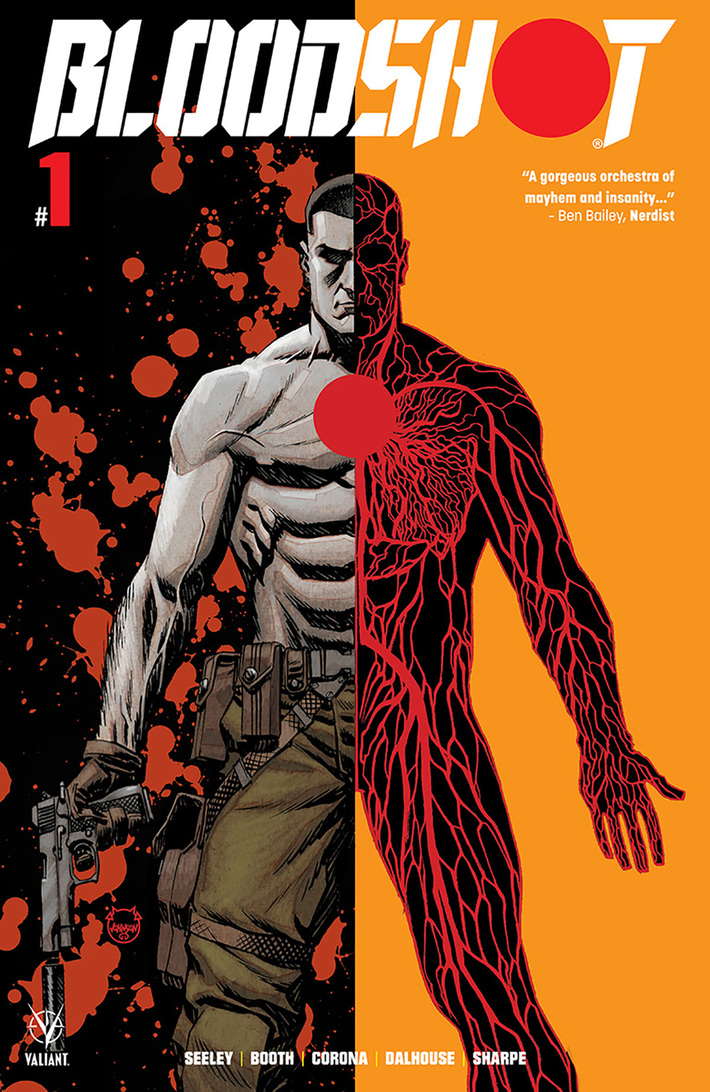 Bloodshot was created in the early ‘90s, and has a title off and on every since. (Cover art by Drew Johnson, copyright Valiant Comics)

I will say that Bloodshot is a pretty cool character, with various series going back to his creation in the early ‘90s. He’s had more than one origin, which actually works for this guy, a machine-man hybrid with lots of false memories implanted by his nefarious handlers. In the early days he believed himself to be low-level gangster Angelo Mortalli (yes, “Angel of Death”) before dying and experimented on by black-ops program Project Rising Spirit, who infused his corpse with nanites, microscopic robots that repair any injury, give him superhuman strength and stamina and allow him limited shapeshifting abilities. Most of that is still true, but Bloodshot’s current operating theory is that he was Marine Ray Garrison before he died.

Bloodshot stars Vin Diesel, the main dude in the popular Fast and Furious franchise, who also voices Groot in Marvel movies. I’m not much of a fan – Diesel’s acting range seems to go from “cranky tough guy” all the way to “cranky tough guy in a bad mood” – but he’s perfect for Bloodshot, whose perpetual grumpiness is well deserved. I’m looking forward to seeing the movie, at whatever time sitting in a crowded room doesn’t feel like attending the Masque of the Red Death. 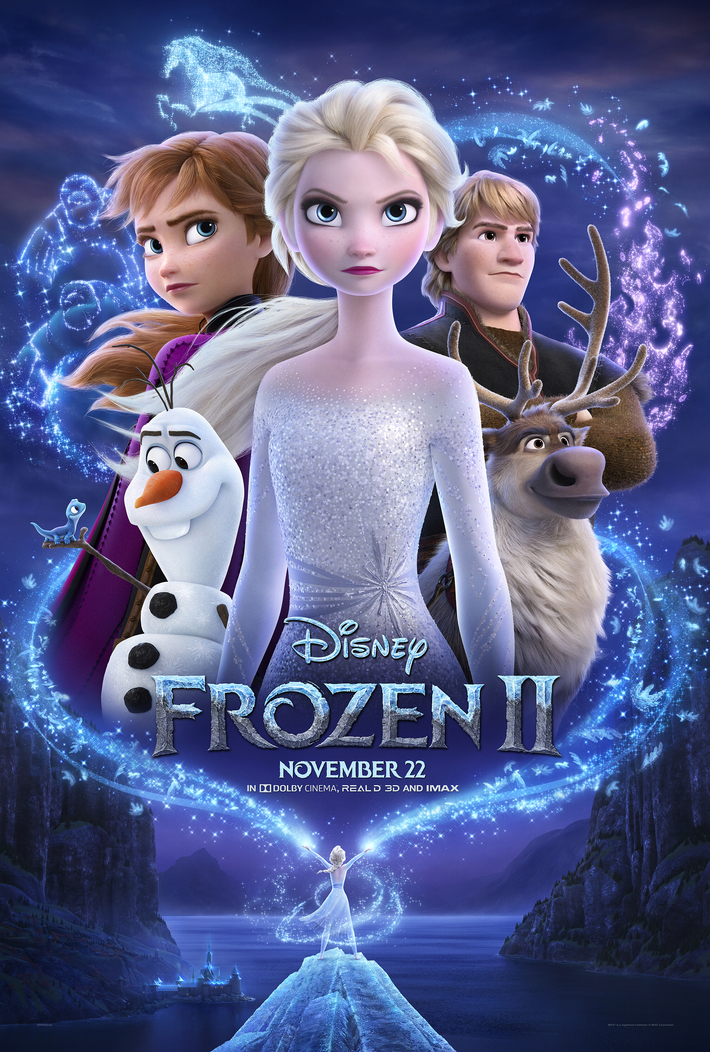 Disney+ dropped Frozen 2 months early due to so many kids being home on extended spring breaks. (Courtesy Walt Disney Co.)

But couching it isn’t exactly painful in the era of Peak TV. Streaming services and self-imposed quarantines are a match made in small-screen heaven, and there’s a metric ton of A-list material available for the discerning viewer. Here’s what’s on my Binge List:

And then there’s The CW! I love this quasi-network’s comics-based “Arrowverse” lineup, but there are so many shows it’s easy to fall behind. So this is a good time to catch up on post-Crisis on Infinite Earths Batwoman, Black Lightning, Flash, Legends and Supergirl. (You can’t watch Arrow because Oliver Queen is dead. DEAD!) Riverdale is also firing on all cylinders these days. Then there’s Katy Keene — not my cup of fabulous, but maybe it’s yours. Camila Mendes (left) and KJ Apa star as, respectively, Veronica Lodge and Archie Andrews on The CW’s Riverdale. Production on the show has been halted due to coronavirus concerns. (Dean Buscher/The CW)

Don’t watch them all up too fast, though, or you’ll run out. Both The Flash and Riverdale have stopped production due to coronavirus fears. It probably won’t stop there. “Given that this closure seems preventative,” says Russ Burlingame at comicbook.com, “and that Berlanti Productions also operate the sets for CW shows like Supergirl and Batwoman, it seems likely that a number of fan-favorite series will be going into hiatus mode for the time being.”*

And it’s not just The CW. Marvel  TV shows Falcon and Winter Soldier, Loki and WandaVision have all halted production. In the case of Falcon, they were shooting in the Czech Republic, but cast and crew have returned to the U.S. Not a good sign. WandaVision has already held a wrap party, but apparently there was more work to do – which is currently not being done.

Netflix has hit pause on all productions for two weeks. WarnerMedia has suspended production on Snowpiercer. Amazon has put Carnival Row and Wheel of Time on hold.

On the good news front, Deadline.com reports that some shows with pilots planned will instead go straight to series production – one of which is Superman & Lois on The CW. And Marvel shows that are in pre-production will continue work remotely.

Needless to say, movie production has also been affected. The Batman, Mission: Impossible 7, Shang-Chi and the Legend of the Ten Rings and all Disney live-action productions have stopped in their tracks.

As to movies scheduled to screen in the next six weeks or so, I’m afraid there’s nothing but bad news. The James Bond film No Time to Die has been moved nine months, to Nov. 25. F9, Mulan, The New Mutants and A Quiet Place Part II have all been indefinitely postponed. (That makes the fourth delay for “Mutants” — let’s hope it screens before stars Charlie Heaton, Anya Taylor-Joy and Maisie Williams hit middle age.)

Cross your fingers for Black Widow (scheduled for May 1)* and Wonder Woman 1984 (June 5).  Those are dates with dangerous women I’m not going to miss, even if I’m the only one in the theater!

The new James Bond movie has been pushed from April 10 to November 25.

Considering its title, is that ironic?

...What Clark said. I recall, reading as long ago as the Nineties, of movie folks wishing to do some sort of opening night pay-per-view, as it was then. Recently, I recall, reading of someone speculate about an " opening night for theatrical release : service charging fifty dollars of so. IIRC, quite recenly, I saw on Youtube, some still-in-theaters?? movies being offered for rental - and LITTLE WOMEN was $14.99 or so! (Others were less0 If you would like a good conspracy theory, mebbe Big Hollywood spead Coronavirus so they could do this:-).........

Warner Bros. made the call. From Variety: "‘Wonder Woman 1984’ Release Pushed Until August, ‘In the Heights’ Postponed Due to Coronavirus Pandemic"