This timeline was inspired by reading Tales from the Dark Multiverse: Crisis on Infinite Earths #1.  As you know, the original post-CoIE Earth was essentially Earth-One with bits of Earths Two, Four, S and X added in.

In this book, the premise is that the post-CoIE Earth was essentially Earth-Two with bits of Earths One, Four, S and X added in.

I like the idea, and the book is OK, but I felt they didn’t do justice to the timeline’s potential, so I decided to work out my own notion of what a post- CoIE Earth mostly based on Earth-Two might have been like.

1945: The Seven Soldiers of Victory disappear while battling the Nebula-Man

Note:  Apart from having the Spy-Smasher join the JSA, I didn’t posit too many changes to the wartime stuff, certainly not as many as one might have.  I’m assuming that after the War, the heroes mostly went back to fighting “civilian” crime.  (While there might have been some “retirements” post-War, just because super-heroes thinned out in the so-called “real world”, that doesn’t have to mean that they all quit in this fictional world.)

1956: Heroes debuting this year include Batwoman (Kathy Kane) and the Flash II (Barry Allen). Barry Allen approaches Jay Garrick seeking permission to use the “Flash” name, which Jay grants after getting to know him. This establishes a pattern which will be followed by other heroes seeking to adopt the names of their predecessors.

1957:  The Challengers of the Unknown are formed. The Martian Manhunter joins the JSA, as the team begins recruiting new members as some of the older ones begin limiting their activities.

1964:  Heroes debuting this year include the Blue Beetle (Dan Garrett), Mento (Steve Dayton) and Zatanna the Magician (Zatanna Zatara). The JSA travels to an alternate universe where they battle the Crime Syndicate of America.

Note: My feeling is that instead of fading out the way they did in DC continuity, the JSA would have recruited worthy new heroes as they appeared.  Also, there wouldn’t have been any Teen Titans, since Dick and Wally would be too old, Roy would still be lost in time, and I’ve decided that Donna and Garth wouldn’t have existed in this timeline, at least not as we knew them.

1973: The Marvel Family and their friends and associates are freed from the suspendium.

1982: Doctor Mist recruits heroes from around the world to form the Global Guardians.

1991: Wonder Woman II and the Silver Scarab join the JSA.

2002: The telepath known as faith debuts.

Interesting but you didn't include Steel the Indestructible Man/Commander Steel and Amazing Man. Was this because they were Bronze Age additions to the Golden Age? Because you included Firebrand and Judomaster (but not the original Blue Beetle?)!

Regarding Commander Steel and Amazing-Man - I completely forgot about them, they were never favorites of mine.

Did DC ever have the Golden Age Blue Beetle as part of their continuity? I was never sure.

What year were Steel  and Amazing-Man supposed to have first appeared in?

Steel first appeared in, naturally, Steel the Indestructible Man #1 (Ma'78). I got it in my Christmas (1977) stocking along with Firestorm the Nuclear Man #1. What possessed my mother to buy these books with characters unfamiliar to her (as opposed to Superman, Batman, Spider-Man or her favorite, Thor) is beyond me!

Anyway, Steel had his origin in the days before the USA entered WWII in 1939. His book lasted a mere five issues. Originally he was supposed to be on Earth-ONE but Roy Thomas moved him to Earth-TWO for All Star Squadron, changing his name to Commander Steel. 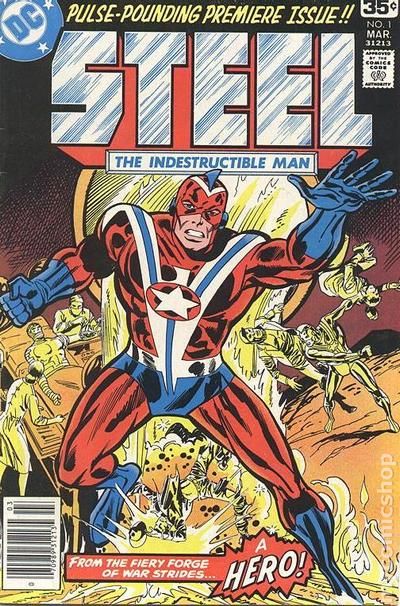 Amazing Man, named for both Bill Everett's original Amazing Man and for Bill Everett himself, made his first appearance in All Star Squadron #23 (Jl'83) so he debuted on Earth-Two in early 1942, having competed in the 1936 Summer Olympics. His "Absorbing Man" powers later were changed into "Magneto" powers, the less said about that, the better. 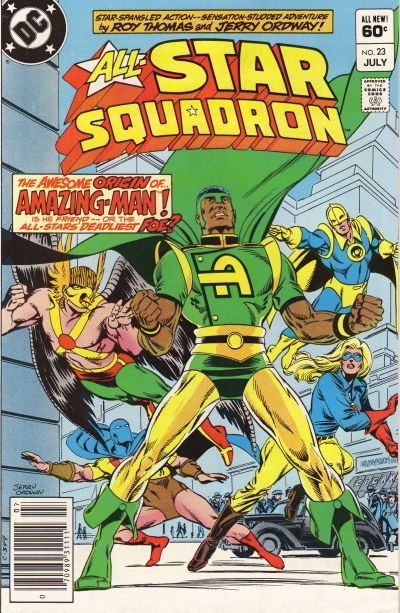 Not sure if DC ever acknowledged the Golden Age Blue Beetle who first appeared in 1939 but we know he existed!

What year were Steel  and Amazing-Man supposed to have first appeared in?

Updated the original post to add the Silver Age

Did DC ever have the Golden Age Blue Beetle as part of their continuity? I was never sure.

I know that Charlton had the Dan Garrett Blue Beetle show up in one of their Ted Kord Blue Beetle stories (below). I think that all of those are canon, since DC has used other elements from the Charlton stories. 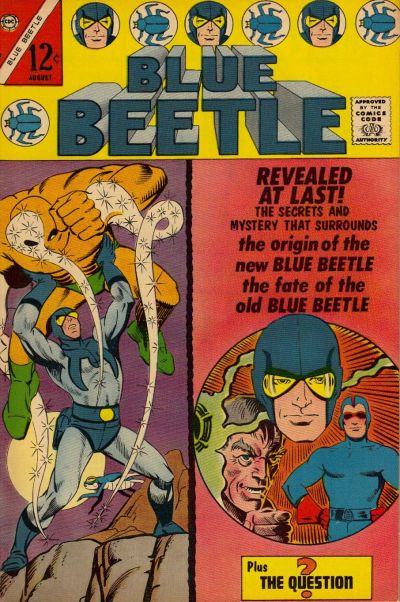 The funny thing is, I read that series, but I don't remember that issue.

The Dan Garrett Blue Beetle was also present during JLA: Year One.

Does Mera exist in this timeline? Aquaman could still look relatively young, given his heritage.

And does Aquaman ever join the Justice Society?