The former is his original origin, the second is from the Ty Templeton special.

So the second is his post-Crisis origin? Makes laughing at his shenanigans kind of cruel.

At DC, Mopee rules over all. There was a post-Crisis account of Plas's origin in Secret Origins #30. Woozy appeared in it, so it may have used his Golden Age origin: but I can't say.

Wasn't there a story where one of the chemicals Barry Allen used to become the Flash was called Mopee?

Permalink Reply by The Baron on October 26, 2014 at 5:25am
I believe so. Supposedly Mopee was a djinn of some sort, perhaps kin to Johnny Thunder's Thunderbolt.

And people have been blaming Superboy-Prime for all of that.

Next is Doom Patrol: The Painting That Ate Paris, by Grant Morrison and Richard Case & John Nyberg.

This collects Doom Patrol #26-34, and covers the Patrol's encounter with the Brotherhood of Dada and the Fifth Horseman, Cliff's descent into Crazy Jane's psyche, their battle with the Cult of the Unwritten Book, Cliff's body trying to kill him, and the Brain and Monsieur Mallah revealing their true feelings for one another.

You know, I'd forgotten I owned this book, or I would've made some mentions of it when I did my thread on the Arcudi Doom Patrol a while back.  That said, this is quite good, filled with lots of entertaining Morrisonian weirdness and pop cultural references, including a villain who references the Sour Grapes Bunch and a mystic oracle who quotes the Mister Ed theme. Fun stuff, that I had no trouble following , for once.

Cull or Keep?: This one's definitely a keeper!

Finally an explanation of the Nu52.

And he hates old people. Jay Garrick and Alan Scott should not be younger than we are!

See how you feel when the President is younger than you!

I started reading comic books in 1966 . I bought this issue , and probably EVERY (or close to it) issue of this series , which I think we can call " PLAZ " for easy distinction , since , IIRC (as , obviously , for everything I say here ~ especially since , well , see below ~ ) , that is how P.M.'s name was abbreviated in it .

I had bought the DIAL H FOR HERO issue of HOUSE OF MYSTERY with a story that " tried out " this PM , as well ! Proably one of my mythological " first few dozen comics " . (and probably my first Robby) .

I have long thought (though fom memory at this time I don't have them) that this series is HIGHLY underrated !

I recall it as quite a funny bit of 1960s Middle-Aged Guy humor .

No , I imagine the editors weren't thinking that their Plaz would in fact not be the " real " Plas when they started the DC series , I imagine they came up with that later .Editors of old , as I'm sure you realize , did not think of continuity the way that we do (And the Robby Reed story's continuity issues I daresay didn't occur to them either .) 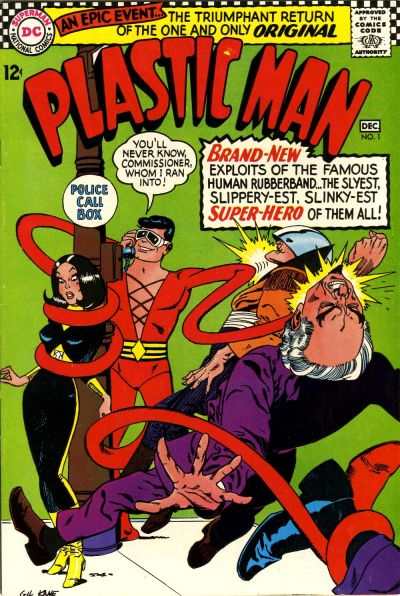