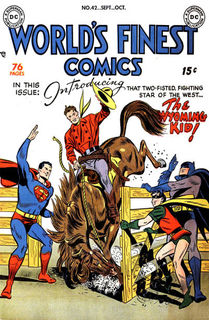 The GCD credits Superman here to Wayne Boring and Stan Kaye, Batman and Robin to Win Mortimer, and the Wyoming Kid to Howard Sherman. I can buy Sherman did the Kid, but Superman and Batman look like they were done by the same artist, or at least the same inker: they have the same chin shadow. Compare #26, which the GCD attributes to Jack Burnley and Charles Paris.

Since the Wyoming Kid was set in the Old West, I guess Superman, Batman and Robin took one of Professor Nichols' "trips" again!

Richard Willis replied to Steve W's discussion A Cover a Day
"A favorite of mine. Songwriter/singer Paul Williams turns in a memorable performance as the villain…"
3 hours ago

Jeff of Earth-J replied to Wandering Sensei: Moderator Man's discussion What Comic Books Have You Read Today?
""Dr. Anj at the Comic Box Commentary blog has been looking over those initial Black Orchid…"
4 hours ago

Lee Houston, Junior replied to Steve W's discussion A Cover a Day
"I wonder if this variant cover inspired Mark Waid to team up with Neal Adams on Antithesis? (Image…"
4 hours ago

Rob Staeger (Grodd Mod) replied to Wandering Sensei: Moderator Man's discussion What Comic Books Have You Read Today?
"The thing about Black Orchid is that no one really knew anything about her. IIRC, she was presented…"
4 hours ago

Jeff of Earth-J replied to Wandering Sensei: Moderator Man's discussion What Comic Books Have You Read Today?
""Well, he's Tarzan. Looking good in a loincloth is pretty much his whole deal." I…"
5 hours ago

Dave Palmer replied to Steve W's discussion A Cover a Day
"We’ve seen a bunch of scary images from Adams, but this one may be the scariest."
10 hours ago

JD DeLuzio replied to Steve W's discussion A Cover a Day
"The poster may not be lying, since few things get proclaimed "horror phantasies,"…"
10 hours ago