Liv Moore (Rose McIver) may have to eat brains, but she does what she can to make it less nasty.  Cate Cameron/Warner Bros. Entertainment Inc. © 2015 WBEI. All rights reserved.

“Zom-com,” the zombie comedy, is now officially a thing.

iZombie, a new TV show adapted from the comic book series of the same name, premieres March 17 on The CW (right after The Flash).  While the show diverges significantly from its source material, one element remains constant: They both rely heavily on the blackest of comedy. 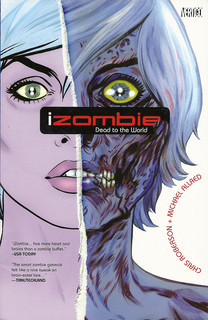 The undead star of iZombie is Olivia “Liv” Moore (Rose McIver), whose very name is a pun. (It’s a homonym for “live more,” which she cannot do.) In the pseudo-science of the show, zombies only become shambling and non-verbal if they don’t have a steady diet of human brains, which Liv achieves by working at the coroner’s office. Medical Examiner Ravi Chakrabarti (Rahul Kohli) knows her secret, but none of her friends and family do; they think the former brilliant pre-med student is wasting her life. (Ha ha!)

This being television, it’s only natural that iZombie is somehow a cop show, and it is. When Liv eats a brain, she gets visions of the deceased’s life, especially his or her final moments, which is mighty handy for homicide Det. Clive Babineaux (Malcolm Goodwin), who writes off her insight as psychic powers. Bullets will fly, bad guys will be arrested and puns will be made. In summary, after Liv eats her just desserts, killers get their just deserts. (See how easy it is?)

As much fun as that promises to be, the comic book series was vastly different – and probably even more fun. At the very least, it was more creative.

iZombie ran for 28 issues (it ended in 2012), published by DC Comics’ Vertigo imprint, which is aimed at adults. Written by Chris Roberson (Masks) and drawn by Mike Allred (Madman), iZombie’s full run has been collected in four trade paperbacks with punny names: Dead to the World; iZombie, uVampire; Six Feet Under and Rising; and  Repossession.

In the comic book, our heroine is Gwen Dylan (nee Gwendolyn Price), who achieves her brains by working as a gravedigger. Like the TV show, she gets visions from the brains she eats, and feels compelled to avenge murders and/or complete dying wishes. That could be the premise of a long-running story all on its own, but Roberson pushed that angle into the background in order to get to a bigger story. 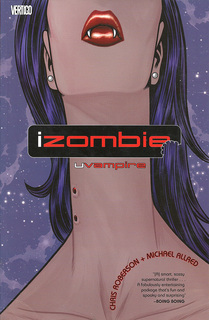 Gwen gets her new name from Ellie, a ghost of a girl who died in the 1960s, as is evidenced by her dialogue (she still says “groovy”) and dresses like a go-go dancer. Our friendly ghost isn’t terribly bright and misunderstood “Gwendolyn” when she heard the name. Gwen and Ellie become best friends anyway – after all, they both live in a graveyard. And who else is a zombie going to talk to at 3 a.m. but a ghost?

Gwen’s other best friend is Scott, who is secretly a were-terrier. Yes, that’s like a werewolf, only substituting “Scottish terrier” for “wolf.” Naturally, Gwen calls him “Spot.”

So our central trio are a zombie, a ghost and a were-terrier, but they are hardly the only supernatural beings who inhabit this world. The series riffs on a number of familiar monsters, including a band of sexy female vampires (who own the Blood Sports Paintball facility to lure male victims), a group of monster hunters (called Gravediggers), undead government agents (the Dead Presidents, led by an undead President Lincoln), a mummy (the urbane, sophisticated and unfailingly polite John Amon, who only occasionally wears the traditional linen wrappings), a Cat Woman (the mummy’s were-cheetah wife), a brain in a jar (actually a coffee pot), a Nazi Frankenstein monster (named after Koshei the Deathless, a Slavic fairy tale), a Bride of Frankenstein (named Galatea, after a statue brought to life in Greek mythology), a teen Frankenstein monster (named Francisco, and the object of romantic desire by both a vampire and a ghost), a talking monkey (actually a chimpanzee possessed by the ghost of Scott’s grandfather), a Cthulhu-like monster (named Xitalu) and the Buffy the Vampire Slayer TV show (“Dixie Mason, Action Girl”).

Roberson explains all this with a fairly straightforward cosmology, wherein every human being has an oversoul (the conscious mind, which encompasses rational thought, memories and personality) and an undersoul (the unconscious mind, or animal urges). If both remain in a body after death, you get a Revenant – like Gwen. If only the oversoul remains in a body after death, you get a vampire; if only the undersoul remains, you get a zombie (of the shambling, non-verbal kind). If an oversoul hangs around after death without a body, we call that a ghost. If an undersoul remains without a body, we call it a poltergeist. Animals only have undersouls, and if a dead animal’s undersoul possesses a human, you get your werewolves, Cat People, were-terriers and the like. And so on. Every monster in the book can be explained by some variation of an oversoul and/or undersoul remaining earthbound when it should have passed on.

Thankfully, Roberson actually doesn’t make a big deal out of these mechanics; he gets the exposition out of the way early (via Amon, the millennia-old mummy who knows a lot of stuff), and then moves on to his story.

Which is a corker. What else do you call an ancient monster out of H.P. Lovecraft coming from another dimensional plane to eat every soul on the planet? Amon knows Xitalu is coming, and has a plan to stop it, using Gwen and sacrificing a lot of people. (All of Amon’s plans seem to involve the sacrifice of other people.)  Galatea welcomes Xitalu’s arrival, and has a plan to trap it in Frankenteen and use its power. Swept up in these competing plans are Gwen, her friend Ellie and Spot, Spot’s geek co-workers Vincent and Ashok, Gwen’s brother Gavin (who hosts a gun-happy, crimefighting ghost called Phantasm), the vampire clique, the Dead Presidents, the Gravediggers and, eventually, the National Guard.

That sounds pretty complicated, but Roberson keeps the story moving briskly with breezy dialogue and a refusal to get too serious. At one point Gwen says of Ellie “Even without glands and brain chemicals and such, ghosts still get depressed sometimes, but it rarely lasts long.” That seems to be Roberson’s philosophy in writing the book as well.

None of which would work without a high-energy, light-hearted art style, which is a perfect description of Allred. His work is largely informed by 1960s pop art, and can make even brain-eating seem bright, upbeat and normal. He has fun with Ellie’s outfits in particular, drawing her as if she had stepped off the set of Laugh-In.

The TV show uses very little of this, of course. Aside from the central character being a zombie who gets visions from eating brains, almost every other particular is different.

Except, apparently, the tone. Both comic book and TV show are zom-coms. Or maybe they’re rom-zom-coms. The undead, more than most, can use a little love!

I loved the comic, so I'm a bit disappointed to hear that the show diverges so significantly. Could still be fun, though, so I'll be watching. After Roberson's very public resignation from all things DC I'll be especially interested in the credits.

I read an interview somewhere that the creators felt like the multiple-monster scenario had already been done elsewhere on TV (True Blood, Being Human, etc.) so they dropped that angle. Some things were prohibitively expensive (they were probably talking about Xitalu). But they loved the comic, and spoke knowingly of Allred, so they wanted to do it -- but all they had left was the brain-eating and memory-having. So they made it a cop show, where that was most useful.

I enjoyed the first episode. They did get the tone right. And the more cosmic aspects of the plot don't kick in until later in the comic series, so they've got plenty of time to establish a different approach. As the opening credits flew by I think I did see Chris Roberson and Michael Allred credited as co-creators.

I have the first episode on my DVR but haven't watched it yet.

It's not the same thing but it reminds me in tone of the 2007-2009 comedy Pushing Daisies, in which the hero could bring someone back for 60 seconds and talk to them. Some of the corpses were killed in spectacular ways which added to the humor. Sometimes this resulted in caught murderers but that wasn't the main direction of the show. This Wikipedia article gives more details of the interactions, including why he couldn't kiss his girlfriend without killing her:

My wife and I watched it the other night, and rather enjoyed it. (She more than me, for some reason). It wouldn't work without a strong actor in the central role, and McIver sold it. She's from New Zealand, another English-speaking but non-American in a major movie or TV role with a flawless American accent (See Andrew Lincoln, Chris Hemsworth, Lauren Cohan, etc.).

I don't know about you guys, but sometimes when I read reviews I wonder if they watched the same show I did. Most of the reviews of iZombie have been positive, but one was negative, and one of the reviewers' chief complaints was that nobody commented on Liv's strange looks. In the show I watched, at least two characters did, one dismissively as a bad fashion/lifestyle choice. So, yes, her looks were addressed and answered in the context of the show, so WTF? I guess when people don't like something, they look for reasons to support their opinion, rather than the other way around.

I had Episodes 2-3 on my DVR when I got back from my trip, so I got caught up. Still enjoying the show very much. Interesting angles on the side-effects of brain eating got explored. Liv gets artistic talent and sensibility from one brain, similar to the language skills she acquired during the premier episode. And she gets sociopathic lack of empathy from another, so it's not all good. Interesting to see her former friend who had been on her own for weeks: apparently without eating brains and interacting with others, these zombies do devolve into the classic brainless, feral mode.

Yeah, Kathy& I are enjoying this one a lot, too. I've read that the next episode (the last one supplied to critics when the show premiered) is the shakiest pf the bunch, but it looks to be on pretty solid footing so far. It's so nice to see a zombie show that isn't trying to be The Walking Dead.

Yeah, we saw a few scenes of that and had a good laugh. But I see a lot of zombie stuff when I'm reviewing movies, and the lighthearted stuff gets me on its side a lot easier than the grim, moody stuff.

Warm Bodies (2013) was a very clever zombie movie. Funny in parts without being stupid.

The first episode of season 2 will be on Tuesday October 6, 2015, following The Flash.

Thanks for noting the season premieres of all these shows, Richard. We're sure going to have a lot to talk about!