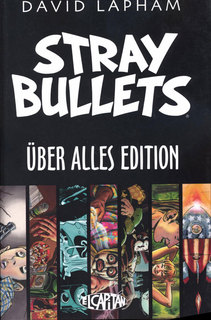 "All of which has me wondering: just whose body is in the trunk in issue #1?"

I didn't give that any thought at the time. But knowing what I know now, I can imagine either Beth or Virginia, and I lean towards Beth. She's already narrowly escaped death more than once. I wonder about her marriage to Monster, also. Seemed like a marriage of convenience for her (but not him).

I read issues #25-27 last night. I have always liked Stray Bullets, but reading them in succession like makes me appreciate what a masterpiece of non-linear storytelling it really is. Not only does it fit together like a puzzle, but it blows me away that each and every chapter, even in such an intricate plot, is a standalone that can be read by itself and still tell a complete story that makes sense.

In #25, Virginia and Bobby fall victim to Ron. While we’re on the edge of our seats, wondering what’s going to happen next, Latham gives us an Amy Racecar story in #26. (“Mary Sunshine”? That sounds like a made-up name. My name’s Amy Racecar.”) Never before has there been such a close correlation between Virginia’s reality and her fantasy. We are able to glean some of what might have happened, but because it’s so surrealistic, we’re still not quite sure.

In #26 we learn a little more, but not much (not enough!), as the story flashes back to fill in details covering a span of the last two years. The way Lapham depicted the same scene from two different points of view (Virginia’s in #25 and Beth’s in #27) was genius. I agree with you that Beth has come to think of Virginia as a daughter, and the way she keeps insisting they are sisters, ironically, makes it even more apparent.

I’m really looking forward to reading the next two issues (consulting the timeline), because I don’t remember what happens next. (I haven’t read your summaries of those issues yet, either.)

I read issues #28 and #29 last night. (I would have read more, but DC’s Rebirth, Marvel’s new Captain America #1 and the final issue of Rachel Rising all shipped yesterday.) I wanted to find out what happened to Virginia and Bobby, but now that I know, I’m not necessarily “happy” about it. (Monster definitely murdered Ron.) Ian is a real hero. After being caught by Blue Ed, Ian slimed at the thought of “Amy” getting away, even knowing that he was about to be beaten to death. It’s tragic that he had to see her recaptured before he died.

Yes, Ian's death is arguably the most tragic event in the series so far. He's a good guy, killed while bravely trying to help, and as you say he doesn't even get the satisfaction of seeing Amy escape.

Mike Hussey arrives in Baltimore and joins the football team, amid a flurry of rumors about what he did in the past. Meanwhile, Stephanie has gone missing, and Virginia makes it her mission to find out what has happened. She figures out where Stephanie is being kept, but Mike engineers her release (by threatening people with a gun and blackmailing Jesse by sleeping with his mother and filming it). Virginia and Mike finally meet at the end.

Date is incorrectly given as January 1984 in the original issue, but from events it's clear that it should be 1986, which is fixed in the reprint.

Stephanie is honoring her agreement to date Kevin, but she really wants to be with Tony. Mike reveals the existence of the blackmail photos, and Virginia runs off to steal them (along with the negatives).

Spring Break: Leon & Virginia read a postcard from Tony thanking them for the help. Mike shows up, suspecting they are behind the theft of the pictures - he reads the postcard, which confirms it. He draws his gun, and tells them to come with him.

Date is incorrectly given as March 1985 in the original issue, but from events it's clear that it should be 1986, which is fixed in the reprint.

Leon confirms that in Issue #34 Mike Hussey did rape Dana, and murder Brian.

What story was it (I think it was a comic book story) that postulated the key to a happy ending is knowing when to stop, when to say “The end”? No matter. If only Virginia and Bobby’s story could have stopped with issue #30, then we might have been able to pretend they lived “happily ever after.” Most of these issues deal with how Virginia’s fitting in (or not) now that she’s back home. Her experiences have made her so much more of a badass than [most of] her classmates. I like the relationship she is developing with Leon, and how she inspires him. “Shenanigans!” (#32, the one with Dez Finger and Lorry) is a great short story in its own right. Great ending!

Good timing! I finished it on Monday, but planned to get to the final issue write-ups later today. There were some notable things about the final issues, so I'll hold off on commenting about the ending.

Getting near the end, but still time for one more Amy Racecar issue. Amy is a samurai, and a great many heads are lopped off, as only a samurai sword can do.

An almost silent issue--time for one last experiment. It's told from Marty's perspective, and he has his hearing aid turned off for most of it. Dez Finger shows up and gives him a package of cocaine to keep. Marty locks it in a box in the shed, oblivious to the fact that Mike and Kevin are dragging a bound Virginia into the shed. When he finds the cocaine missing at the end, he locks himself into the shed and smashes his hearing aid.

A 10 page story titled "Open the Goddamn Box" was published in the Dark Horse anthology book "Noir: A Collection Of Crime Comics", and occurs within the events of this issue. It's a remarkable bit of storytelling, showing how Virginia escaped. Lapham manages to get in a recap of the early history between Kevin and Virginia as well (the stabbing with a pencil early in the series). I have a copy and read it right after reading the issue. I highly recommend getting your hands on it.

The climax of the Virginia/Mike "relationship." The whole final arc shows why Mike was introduced late in the series: to give Virginia her own Baltimore nemesis. I noticed that V was given lots of Beth-like facial expressions, especially a narrow-eyed look when she's angry. In the end she bites off Mike's finger and almost kills him, but Dez Finger stops her, and Mike reveals where Leon is being held. She tells Leon she'll stay--and sleeps with him--but in the final scene she grabs her backpack and hits the road. It is a great ending. But I am a little bummed that Beth's story was left hanging. When Virginia came back to Baltimore the story basically became her story.

“When Virginia came back to Baltimore the story basically became her story.”

Stray Bullets #40 was released in 2005, but #41 didn’t come out until 2014. IIRC, #41, Killers #1 and the Über Alles edition were released simultaneously. Because I had long since lost the story (I don’t think I read Stray Bullets at all those nine years), I decided not to read #41 until I re-read #1-40, so this past weekend was actually my first time reading it. I’m glad I waited. Read cold, #41 wouldn’t have had the impact it did, otherwise, and I would have only spoiled it for myself.

I didn’t know about the Dark Horse anthology you mention. I’ll have to see if I can find it.

That's a very compelling theory. Certainly she was introduced earlier in the series than Beth--Issue #2, the one that actually begins the timeline. Even the Seaside interlude can be seen as a way to pick up her story, and give her the opportunity to move to Los Angeles with Beth. I went back and looked at the summary of Issue #1: the crazy guy says the corpse in the trunk was named Janice, but it's hard to consider him any kind of reliable narrator.

I've already read the Killers miniseries that is collected in Vol. 6 of the new set of TPBs, but I think it would have much more resonance now, so I do plan to re-read it sometime in the next few weeks.