I would have thought the dress uniforms might have shown up in Court marshall or the Cage part 1 or 2.... did anyone notice?

The Star Fleet dress uniform appeared in both: 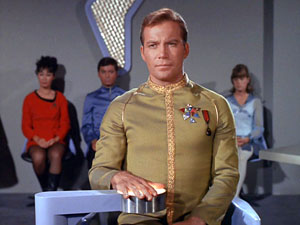 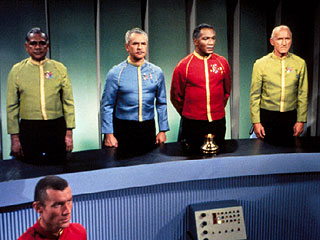 Is Kirk swearing on something in that first picture, like they swear on the bible today?

(Fascinating how Star Trek so determinedly avoided for so long showing any religion in the future of humanity.)  I haven't seen many modern Sci-Fi shows, but religion was central to Battlestar Galactica, and a reverend was one of the central characters in Firefly.)

Or is it some kind of truth device?

I've always wondered myself about the distinctive uniform shirts worn by Kirk. I was not a maven of the show so it took me a few viewings to tumble to the fact that Captain Kirk actually wore three different styles of uniform shirts over the course of the show.  (Not counting the "two-stripe" one from "Where No Man Has Gone Before" or his dress uniform.) 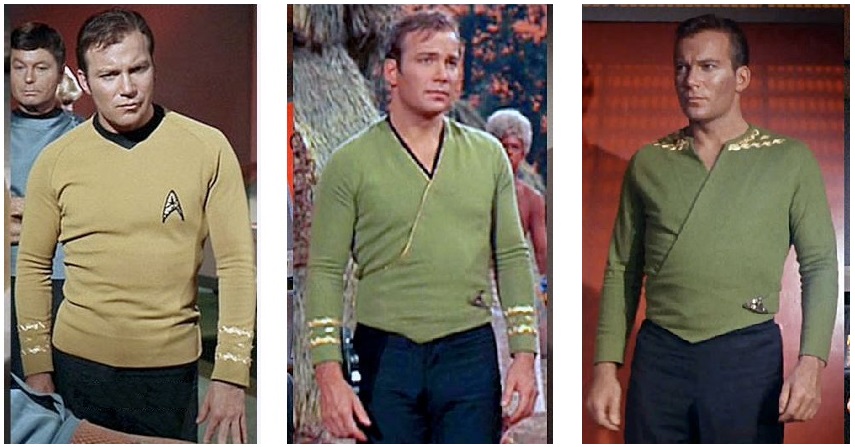 First was the standard shirt in "command gold", with the piping-insignia of a Starfleet captain on the sleeves.  From sources I've read, supposedly this shirt was actually green, but appeared gold on the screen, due to the limitations in colour-transfer in the broadcast technology of the day.  If so, I'm guessing it was a green with a great deal of yellow in it, such as a chartreuse.

Then there two different versions of the green wrap-around shirt.  The first one to appear on the show displayed Kirk's rank as piping on the sleeves, as in his command gold shirt.

The second version of the green wrap-around, though, displayed his rank at the leading edge of the collar, with nothing on the sleeves.

The culture of Star Trek being so pervasive as it is, certainly the reason why Shatner/Kirk had three different versions of uniform shirt must be out there, someplace.  But I've never come across it.

I'm guessing it's one of three reasons (or maybe a combination):

1.  An issue of fit.  The material of the command-gold shirt gradually shrunk over repeated cleanings.  Over time, the shrinkage became noticeable, especially as Shatner began to gain weight.  The wrap-around versions with the "V" drape in front gave the illusion of length.

2.  An issue of comfort.  Perhaps Shatner found the black-band collar of his command-gold shirt to be chafing.

3.  Shatner's ego.  Shatner wanted a special shirt exclusive to him, to make him stand out from any other characters wearing a command-gold shirt.

Right now, anyone's guess about it is as good as mine.

OBSESSION, as someone put it, gives Kirk the chance to do "Matt Decker", feeling guilty over something he did, and desperate to make up for it by destroying the thing that killed his crew-mates and Captain years ago.

Apparently this episode holds the record for most "red shirt" deaths.  Even Mr. Leslie bites the dust! (Although, apparently, he got better, as he returned for later episodes.) Then there's the son of Kirk's 1st Captain, who's now in the same spot Kirk was in then.  When he hesitates to shoot for only a moment, Kirk really over-reacts, removing him from duty and confining him to quarters, where he has nothing to do but feel guilty, the same way Kirk did and does.  Yet when the ships phasers fail to kill the monster, it only shows that had either man not hesitated, there would have been no difference!

Once again Sol Kaplan's THE DOOMSDAY MACHINE score is recycled-- somebody must have really loved that "planet killer" music!  "Kirk Does it Again" is heard as Kirk & Garrovik are waiting for the cloud-monster to get close enough before they detonate an OUNCE of anti-matter, and hope the transporter can get them to safety before they're either killed by the monster, or lost in the ensuing explosive shock-wave.

THE IMMUNITY SYNDROME may be one of the most intense, single-minded, suspenseful episodes in the show's run.  Like a redo of THE DOOMSDAY MACHINE or THE CHANGELING, the Enterprise encounters something that has already killed billions, and will kill even more if it's not stopped.  The long, slow, drawn-out, overly-serious sequences of the ship approaching the gigantic monster amoeba appears to have been one of the inspirations for the similar scenes in STAR TREK: THE MOTION SICKNESS, except it's all done much better and more dramatically here.

Spock & McCoy vie for the chance to go on a fact-finding suicide mission, and Kirk apologizes to Spock when he's the one chosen.  And, sure enough, it looks like Spock gets killed before the story's over.  That seemed to be happening a lot this season!  But after the Enterprise manages to plant a bomb that will hopefully kill the single-celled monster, they discover on their way out that Spock is still alive, though he insists they not try to save him.  "SHUT UP, Spock!  We're RESCUEING you!"  "Why, THANK you-- CAPTAIN McCoy."  A real mind-blower, both dramatically and visually.

A PIECE OF THE ACTION, at least in production order, follows BREAD AND CIRCUSES in the "parallel Earth" category.  Instead of "Roman Empire planet", this time it's "gangster planet", and instead of a bizarre coincidence, this time it's genuine "contamination", in the form of a BOOK-- "Chicago Gangs of the 1920's"-- somehow left behind by another Earth ship 100 years before.  What makes this episode 100 times more watchable than B&C was, to me, is that while it could be viewed at least partly as a "rat-maze" story, Kirk, Spock & McCoy actually do escape, only to be re-captured, only to gain the upper hand, only to lose it, but not for long.  That, and the whole thing is played for COMEDY!

Incredibly, someone at the IMDB kept comparing this to THE GODFATHER, incredulous that the show somehow "predicted" that film several years early, while failing spectacularly to realize that Desilu was the same studio who produced THE UNTOUCHABLES with Robert Stack!  (Not to mention that before being acquired by Desilu, the studio had been RKO, where countless gangster films were filmed, including the late-40's DICK TRACY series.)

It's hilarious to see Kirk "get into" the way things are done on this planet, and more so to watch Scotty, then Spock, try to follow suit.  You know Spock has "gotten" it when he abruptly swings his machine gun toward someone, then menacingly tells the boss, "I'd advise yous to keep dylin', Oxymyx!"  No matter what I've seen them in, I'll always remember Anthony Caruso and Victor Tayback for this episode.

While THE CORBOMITE MANEUVER, AMOK TIME and THE DOOMESDAY MACHINE scores have been recycled endlessly of late, this time around, I heard cues from FRIDAY'S CHILD and THE TROUBLE WITH TRIBBLES (specifically, the bit where the Enterprise leaves orbit in the former, and, the bar-room brawl in the latter).

I just want to say for the record that I thought The Immunity Syndrom was the WORST star trek episode EVER!

I thought the special effects were poor, the plot dragged, and the entire crew suffers from "dumbitise"...it so obviously is/was an ameba... and I couldn't believe the good doctor wouldn't have seen the solution right off!

Isn't this usually reserved for LOST IN SPACE discussions?   : )

AND THE CHILDREN SHALL LEAD

Runners-up would include THE GALILEO SEVEN.

Yes, incredibly, THE OMEGA GLORY is no longer on the list.  YES, it's a "train wreck" that gets worse with each consecutive scene, but somehow, it's mezmerizing and entertaining in its awfulness...!

The episodes on the above list are those that, apart from forcing myself to watch every single episode (as I did last time), I find simply unbearable and unwatchable.

It would be too easy to come up with a similar LIS list, except it's been so long since I've seen them, I'd have to look up the exact titles...

Unlike most of my comments going from memory, I've recently seen JOURNEY TO BABEL so...

The "real" James T. Kirk would NEVER have allowed himself to be promoted to Admiral, and given up command of The Enterprise.  NEVER.

Sure, James Kirk might have loved being a captain, and running the Enterprise, but Starfleet might well have wanted him to do more -- or not stand in the way of others capable of more.

You're essentially correct, CK. Of course, we don't know if Starfleet operated according to the same paradigm, but it really wouldn't matter.

Certainly, Jim Kirk could refuse a promotion to flag rank, but there's nothing he could do about Starfleet transferring him off Enterprise.  No-one in any military service anywhere gets to say "I'm going to stay in this job for as long as I want it."  Even the service chiefs of the U.S. armed forces have to leave after two years (four in special cases, but never more than that).

Once ordered off Enterprise, Kirk would have two options---retire or be reassigned.  If he's going to be reassigned off Enterprise anyway, it makes more sense that he would go to his new job as an admiral, vice a captain.  So Kirk likely would not have turned down the promotion to flag rank.

OMG Henry....I appologize... I had purposefully forgotten that dreadful episode "The Empath".  That has to be the bottom.

Philip Portelli: "Sarek and Amanda reappeared in the animated series, the novels, the movies, the comic books and Next Generation and rightfully so."

Sarek appeared in Next Generation, but Amanda did not. Sarek had a different wife at that time.