The Great Betty White, Dead at 99

I became a fan when she played Sue Ann Nivens, a terrible co-worker, on the Mary Tyler Moore show. Everything she did later was just as good.

Betty White was just days away from turning 100 (on Jan. 17), which People features on the cover of its next issue: The cover feature has this editor's note appended to the top:

Betty White has, sadly, died since the publication of this article, her rep confirmed to PEOPLE on Dec. 31, 2021. The beloved actress, who participated in this interview with PEOPLE just a few weeks before her death, was 99.

Our hearts mourn today with the passing of Betty White. During the many years we worked with her, we developed a great love and admiration for Betty as a person, and as an accomplished entertainer. We are thankful for the many decades of delight she brought to everyone. Betty always said she was the "luckiest broad on two feet” to have had a career as long as she did. And honestly, we were the lucky ones to have had her for so long.

We will go forward with our plans to show the film on January 17 in hopes our film will provide a way for all who loved her to celebrate her life—and experience what made her such a national treasure.

You’ll experience Betty's funniest moments on The Golden Girls, hosting SNL, Hot in Cleveland, The Proposal, The Mary Tyler Moore Show—and a lost episode from Betty’s very first sitcom. Plus Betty reveals inside stories of her amazing life and career.

One of my favorite Betty White moments was the time she guest-starred on St. Elsewhere. I described it over here on Facebook a while back.

It was more like a cameo, but the whole scene was pretty meta, in that St. Elsewhere way.

They had an ongoing subplot about an amnesiac patient, John Doe No. 6, who was desperate to discern his true identity (a nod to those fans of The Prisoner out there). Once, John Doe No. 6 called every number in the phone book, on the hope someone on the other end could tell him who he was.

Anyway, in this episode, John Doe No. 6 decided that if he didn't know his identity, he would chose one: Mary Richards from The Mary Tyler Moore Show!

It was then that we met Mr. Carlin from The Bob Newhart Show, in the psych ward -- and he's watching a rerun of The White Shadow, which was, like all shows mentioned here, produced by MTM. Mr. Carlin even makes an aside that The White Shadow producer is a clever guy; of course, he's also The St. Elsewhere producer!

John Doe No. 6 has gone so far as to rename his fellow psych patients, but Mr. Carlin starts arguing that his name is not "Murray," and when the staff psychiatrist referees, John Doe No. 6 starts crying, "Oh, Mr. Grant," and runs off.

It so happens that Betty White is guest starring in the episode as the First Lady's physician, visiting from Bethesda Naval Medical Center. So she comes striding down the hall in her Navy dress blues, and John Doe No. 6 exclaims, "Sue Ann Nivens! The Happy Homemaker!"

Betty doesn't break stride, doesn't crack a smile, "I don't know what you're talking about. Sorry." and keeps on walking.

I'm glad she lived such a long, happy and productive life.

If all that isn't enough, here's a tribute from the Military Times recognizing her WWII service.

Tonight, Saturday Night Live will rerun the 2010 episode in which Betty White hosted by popular demand (some guy launched a Facebook campaign after her Snickers ad hit the airwaves). "You know what's really great? We told Betty White that we loved her while she was still alive." 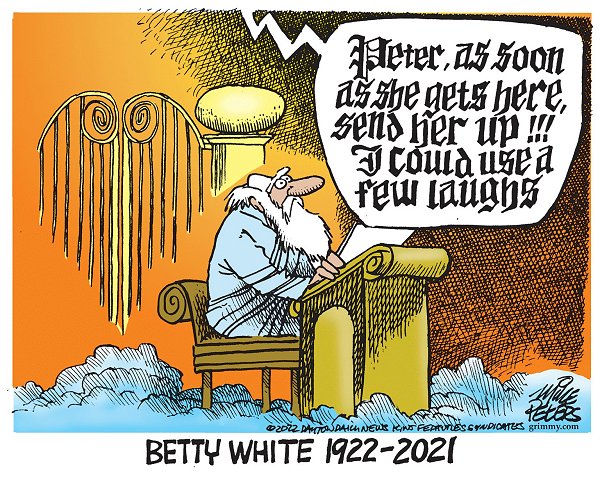 Lee Houston, Junior replied to Steve W's discussion A Cover a Day
"As previously mentioned (page 1382), I have no idea exactly how many times Neal Adams riffed his…"
7 hours ago

Jeff of Earth-J replied to Jeff of Earth-J's discussion Swamp Thing
"ISSUE #25 - "The Sleep of Reason..." This issue's title comes from Francisco…"
9 hours ago

Jeff of Earth-J replied to Jeff of Earth-J's discussion Swamp Thing
""This is my first reading of these issues." I'm glad to have you participating! If…"
10 hours ago

Richard Willis replied to Jeff of Earth-J's discussion Swamp Thing
"As I mentioned previously, I had purchased the several TPB editions that cover the Alan Moore run…"
11 hours ago