So, as spooky season has just passed, I started wondering about something.

This is an example of what many would consider a classic witch: 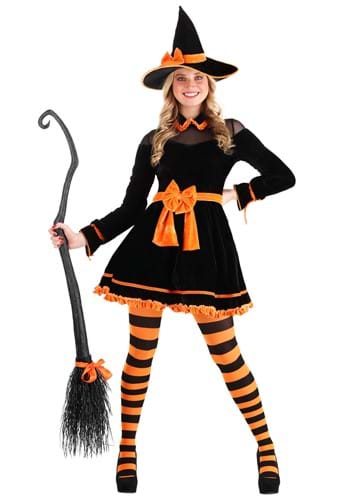 I think most of us, if we saw this photo or saw someone wearing this outfit, our first reaction would be "Witch". Most of the standard trappings are there -- pointy hat, black dress broom, striped socks/stockings (the black cat familiar is missing, and there's not a cauldron but I would consider those part of the iconic look).

So my question, and what I'm pondering, is where did this iconography come from, and how long has it been associated with witches?

For example. I'm aware of the idea of witches using cauldrons goes back to at least Shakespeare's time, as witches feature in the Scottish Tragedy.

My first awareness of the striped socks, on the other hand, was the Wizard of Oz.

As I figured this is lively as learned a group as I can find, I hoping to piece together some answers.

This article  addresses the issue of witches and broomsticks.

Ray Bradbury's The Halloween Tree also addresses witches and broomsticks (among other things).

Belief in witches is a widespread type of belief of ancient origin. There can be an issue of whether "witch" is the correct term, as with the Witch of Endor from 1 Samuel, who is not called a witch in the text, and is a kind of medium or oracle. The text "Thou Shalt Not Suffer a Witch to Live" is the KJV translation of Ex 22.18. Wikipedia's article "Witchcraft and divination in the Hebrew Bible" has information about the original context of the verse.

I think we should take the malignancy of witches as part of the concept, and avoid the term "witch" when this element is not present. So taken, the idea of the evil eye is related. Sometimes one runs into imagery of witches in a group, perhaps with demons, coursing through the air. I take that to be related to the Wild Hunt tradition.

Belief in witches and magic was part of Roman culture. Apuleius (2nd C AD) had to defend himself in court against a charge of having used magic, and the published version of his speech of defence survives. In his The Golden Ass the narrator is transformed into a donkey by magic ointment. He's eventually restored by Isis. Apuleius was a Middle Platonist, and the work promotes the mystery religion version of her cult. Lucian (also 2nd C AD) attacked stories about magic in Lover of Lies. He was an Epicurean, ideologically committed to rejection of belief in the supernatural.

Back in the 1990s I skip-read part of Witches and Neighbours by Robin Briggs, on the European witch panic. It links the witch accusations of the period to the tensions which exist in small communities.

Not too long after I once saw a piece on, I think, a foreign affairs show in which the reporter talked to a Caribbean woman who had lost more than one child in infancy. She said she suspected her neighbor was a witch, and if she lost another, she'd be sure. I felt I was seeing what Briggs had written about.

The witch panic was late Medieval/early modern. The Salem witch trails were a late manifestation. It was partly set rolling by a sensationalist 15th century Latin work called the Malleus Maleficarum ("Hammer of Witches"), which popularised the notion that witches are people who have made a pact with the Devil.

The panic was worse in some places than others. The majority of accusations were of women, but men were also accused. Briggs estimates 20-25 per cent of the executed were men.

In places during the panic the accused were tortured to make them confess, producing false confessions which could then be taken as evidence of the reality of witches.

During the reign of Henry VI of England the second wife of Humphrey, Duke of Gloucester was convicted of having plotted against the life of the king using witchcraft. Wikipedia tells me she was sentenced to life imprisonment and a couple of her supposed co-conspirators were executed. The episode is depicted in Henry VI part 2.

Wikipedia says the first printed source of the Faust legend is 16th century, and notes the related Polish legend about Sir or Master Twardowski which has featured in Polish literature.

James I of England was James VI of Scotland. Before obtaining the English throne he wrote a book endorsing belief in witches called Daemonologie, published in 1597.

The witches in Macbeth are malignant figures ("Fair is foul, and foul is fair") with familiars (Graymalkin, Paddock). They fly off at the end of their first scene ("Hover through the fog and filthy air.")

Another Jacobean play on the witchcraft theme is The Witch of Edmonton by Rowley, Dekker and Ford, which I've never got around to reading. Wikipedia's page on it links to pages on two more plays, The Witch by Thomas Middleton (not printed until 1778, apparently), and The Late Lancashire Witches by Thomas Heywood and Richard Brome, which is Caroline and related to historical witch trials, as the page explains.

Material on this subject was sometimes illustrated by woodcuts. This article has a number of images and information about their dates. Dürer did an engraving of a naked witch riding backwards on a flying goat which might be NSFW.

Another Jacobean play on the witchcraft theme is The Witch of Edmonton by Rowley, Dekker and Ford, which I've never got around to reading.

I listened to the Librivox version last night. The witch element is mostly secondary-  it has a primary plot, secondary plot construction - but the witch plot is interesting and illustrates popular beliefs. It's a good play with moving sequences.

Candace Savage's Witch: The Wild Ride from Wicked to Wiccan notes that the pointy hat is a particular type of European country woman's hat, and that, by the 1700s, the witch (now mostly fictional in the west) had been remade into the image of a country woman, in black, so that a nineteenth-century group of country widows now looks like a coven to us: 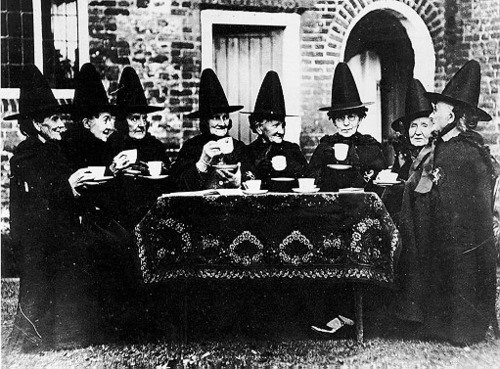 While, for all the speculation online, the green skin seems to have originated with MGM's Wizard of Oz.

A town over, a group of women have started performing an annual near-Halloween "witch dance" in a park for charitable donations. I missed them this year, but hope to go in 2023. They dress, basically, like the witch cliche.

I read an article a few years ago that was specifically dedicated to the various parts of the traditional witches' wardrobe. I've done my best to find it, but cannot.

Wait, I found it:

So, There's Actually a Reason Why Witches Wear Pointed Hats and Fly...

Richard Willis replied to Jeff of Earth-J's discussion T.H.U.N.D.E.R. Agents
"DC COMICS - (2011): ISSUE #2: As he continues to run, different visions of an ever-decreasing…"
10 hours ago

Jeff of Earth-J replied to The Baron's discussion Movies I Have Seen Lately
"FROM RUSSIA WITH LOVE: I'll save my comments for Cap's discussion (which should be up…"
15 hours ago

Richard Willis replied to The Baron's discussion Movies I Have Seen Lately
"JD DeLuzio said: Speaking of Mansters, I re-watched Matinee for the first time in many years.…"
20 hours ago

Jeff of Earth-J replied to Jeff of Earth-J's discussion T.H.U.N.D.E.R. Agents
"ISSUE #9: Same artists and format as last issue. I think by #8 I was reading only the Mike Grell…"
20 hours ago