Three weeks from today, on the 28th of August, Jack Kirby would have been 100 years old.
I feel terribly presumptuous being so new here, but there does not as yet seem to be a thread acknowledging this rather momentous occasion. So... 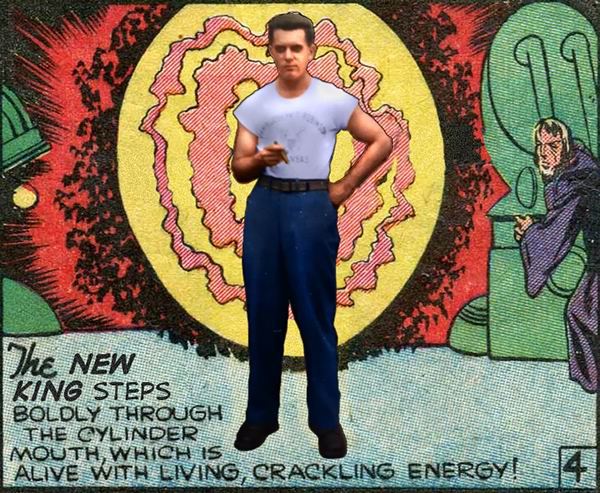 ...and our world was never again the same.

MY world was certainly a better place.
There's The King of Rock, The King of Pop, The King of this, that, and thyne other. But, for me, there's only one "The King"
Jack "King" Kirby rocked my world and gave it a dynamic that i didn't know was missing. There were a few artists whose work drove me to become an artist myself - Jack was the first and the last of them. Along the way artists like Kelly Freas, Will Eisner, Al Capp, and Frank Frazetta all inspired an inner flame that drove me down the path of artist. Later many others from around the globe added fuel to the fire that drove me, but it was Jack's comics that first woke that urge, and every step along the way he would reveal new secrets to me. Even now, no matter how well i might have thought i knew his work, he still constantly surprises me and surpasses my concept of what he was in my mind. This month in my celebration of the Kirby centennial, i've been digging and re-reading everything of his that i have or can get my hands on. (And i got my hands on a lot) I'm only a week in and have already lost count of new discoveries and new ways to be impressed.
I won't try to define or impart the impact of Kirby's works beyond their personal touch to me.
If you're here, you know how massive Jack Kirby's contributions and influences are. I can only say that he influenced my world view as much as any philosopher or writer whose work i studied. He helped shape the better parts of me. My world was very much a better place for his having been in it.

Let's use this thread to share thoughts, memories, tributes, art, etc.,. Anything about or by Jack that you feel like sharing to celebrate the Kirby Centennial.

To help kick it off: (Original Kirby art from Blue Bolt #5, Strange Tales #184, Kirby Self Portrait in New Gods #5-y'know, if you was interested)

I want to read that Classics Illustrated adaptation, but I'm still determined to read the book first. I wish Kirby had done a tabloid giant with a Roman Empire theme.

This is the GCD listing for the Kirby/Ayers redrawn version:

According to the inside-back-cover commentary of my Jack Lake Productions reprint, the redrawn Last Days of Pompeii was the first reissued book to bear the new name Classics Illustrated.

Kirby's other work for the company included Classics Illustrated Special Issue #162A - The War Between the States.

According to GCD, the Kirby/Ayers team contributed three 6-page segments to this 96-page book. The three cited do look like Kirby to me, now that I look at them closely. This GCD listing is for the #162A: