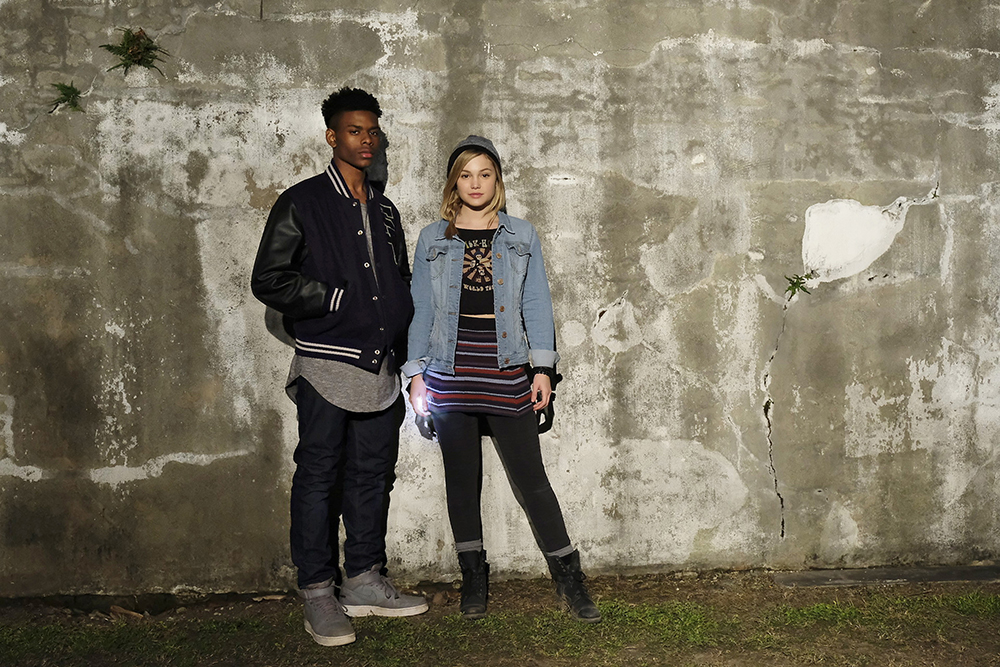 If ever there was a Marvel property suited for adaptation to television, it’s Cloak & Dagger – which comes to the Freeform Channel on June 7.

Like a lot of good comics, Cloak & Dagger is a familiar genre – in this case, coming of age – delivered with the added excitement, possibilities and complications of a world with super-powers. The two principals embody the concepts of light and dark, which gives the cinematographer a lot of options. And it’s brought to us by showrunner Joe Pokaski, known for Heroes, who surely knows his way around a good superhero story.

Created in 1982 by writer Bill Mantlo and artist Ed Hannigan, Cloak & Dagger are the codenames of two teenage runaways, Tyrone “Ty” Johnson and Tandy Bowen. In his introduction, Johnson was a poor kid with a stutter, a speech impediment that contributed to a friend being gunned down by police. Bowen was a poor little rich girl who ran away from her millionaire, supermodel mother because Mom ignored her.

Both found themselves in New York (Johnson was from Boston), where Ty impulsively helps Tandy when her purse is stolen. He accompanies her when a stranger offers a place to crash, which turns out to be – surprise! – a den of drug dealers who are using street kids as test subjects for synthetic heroin. The drugs kill all the kids but Johnson and Bowen, who discover that instead of being deceased, they have super-powers.

Things don’t go so well for the drug dealers after that. 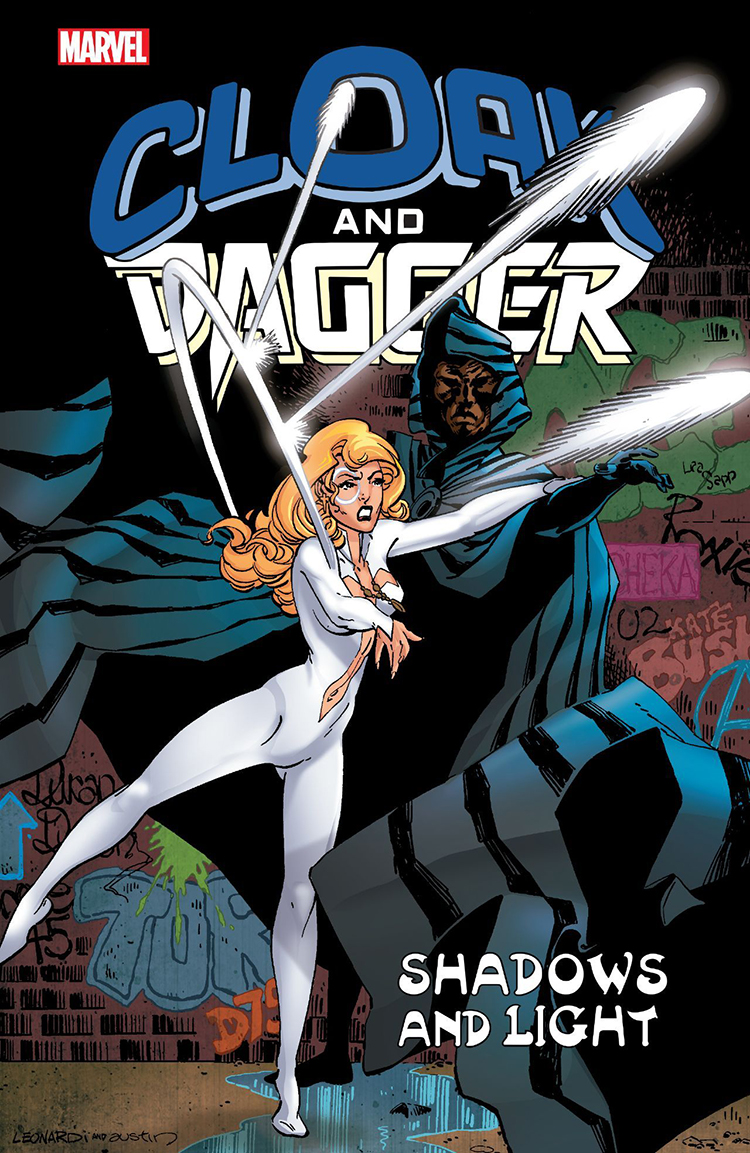 Most Cloak & Dagger stories are available in trade paperback. Cloak & Dagger: Shadows & Light collects many of their early stories from the 1980s, including team-ups with Spider-Man and the New Mutants.

Johnson finds he is connected to a place called the Darkforce Dimension, which absorbs light and energy. He can also teleport by taking short cuts through that dimension. Since he is always exuding darkness – which tends to freak people out – he covers himself with an abandoned blanket and dubs himself Cloak.

Bowen gets the better end of the deal – she generates light, and lots of it. She can form that light into solid knives, which go where she wants them to. Which is really convenient, since she can call herself Dagger. She adopted white, form-fitting dancewear – she has had some ballet training – with a dagger-shaped window on her chest.

But there’s a catch: Johnson needs energy to feed the Darkforce Dimension to survive. He can get that by pulling people inside his cloak, where they are paralyzed by cold and assaulted by their greatest fears. If they stay there too long, they go mad – unless their energy is absorbed completely, whereupon they join the choir invisible. Only Dagger can generate enough light to keep Cloak’s hunger sated. The two are stuck together.

The pair have a grudge against drug dealers, obviously, so that is their focus in the early Cloak & Dagger stories. The absence of colorful supervillains resulted in grittier stories than you usually find with Spider-Man (whom they ran into frequently) and other “street level” superheroes. They were also pretty lethal in their original conception, which meant that Spider-Man and his amazing friends, while sympathetic, often tried to stop their crusade.

Of course, nothing stays static in the Marvel Universe, so Cloak & Dagger have gone through some changes over the years. For one thing, they try not to get all murder-y on their enemies any more. Tandy eventually developed problems with her powers as well, tying her even more tightly to Cloak’s proximity, even while she tried to date other people. And both were eventually revealed to be mutants, explaining why they didn’t die in that drug den – the fake heroin served to jump-start their powers instead of stopping their hearts.

There was also some hoo-ha in the early ‘90s that tried to establish that Cloak & Dagger owe their origin, at least to some degree, to an extra-dimensional entity named D’Spayre, a mystical “Fear Lord” who usually fights the likes of Dr. Strange. I think we can safely assume the TV show will ignore that, as do most fans.

Speaking of Dr. Strange, our angsty teens have teamed with the Master of the Mystic Arts on several occasions. In fact, they’ve appeared with most of the Marvel characters familiar to TV and movie viewers, including multiple times with the Avengers, Black Widow, Captain America, Daredevil, Iron Fist, Luke Cage, Punisher, Venom and a variety of X-Men. Cloak & Dagger have also fought their fair share of supervillains, including heavy hitters like Mephisto, Dr. Doom and even Thanos. 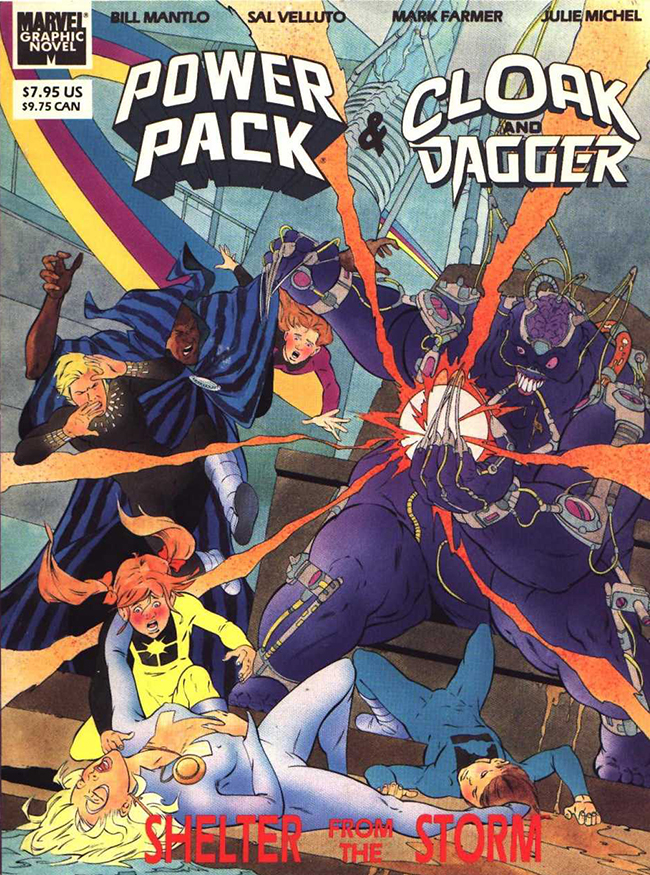 Cloak & Dagger have teamed with most of Marvel’s younger characters, including the pre-teen Power Pack in this graphic novel.

But what’s really exciting for TV viewers are the team-ups the pair have had with other teen-angst super-teams like The Runaways and the New Mutants. While the stars would have to align just right – New Mutants is a Fox movie property, and Runaways is on Hulu – one can imagine the Cloak & Dagger team salivating at the prospect of adapting one of those comic book crossovers to the small screen.

Plus, there’s The Gifted on Fox and all of those Marvel properties on Netflix. Cloak & Dagger meeting the Defenders would create so much awesomeness that the gravity might destroy us all.

Cloak & Dagger also picked up some supporting characters that will make their way to the TV show in some form. A Father Delgado allowed the kids to crash at his Holy Ghost Church (before he went nuts and died). And a police detective named Brigid O’Reilly initially was the duo’s Inspector Javert, but eventually  became an ally (and a vigilante herself).

That’s the comics, though, and TV doesn’t have to conform to those concepts. In fact, Pokaski has already changed a few things around in the premiere, without losing sight of the core concept.

One welcome change is scrubbing of the 1982 cliches that informed the kids’ backgrounds. On TV, Tyrone (Aubrey Joseph) is upper middle class, with a bright future ahead. It’s Tandy (Olivia Holt) who is the budding criminal, a pickpocket essentially abandoned by alcoholic parents. Sadly, one element remains intact, because it is still true in our culture: Tyrone feels guilt and shame from a close acquaintance gunned down by police (in this case, his brother).

Also, the origin is shifted back to when Tandy and Tyrone are children, where an accident involving the Roxxon Corporation is the source of their super-powers. Roxxon is Marvel’s all-purpose evil corporation, and we see the accident and its effects in a series of flashbacks. (Evidently drug dealers as villains just don’t have the cachet they used to.)

The current storyline is set in New Orleans, instead of New York, which should give the show a different flavor than all those Netflix shows, and even Runaways, which is set in Los Angeles. And Tyrone and Tandy are a romantic couple on the screen, as opposed to the comics, where Cloak’s love for Dagger is usually a one-way street.

But hey, however it goes, we’re going to enjoy some teen drama spiced with super-powers.  Let’s hope the show’s light (and dark) live up to the promise.

An  L.A. Times article on Cloak and Dagger

The first two eps have aired. Comments, anyone?

Not on the show, but I hope Bill Mantlo gets some money out of this.

EDIT: ...and Guardians of the Galaxy (for rocket raccoon).

Just finished watching the ten episodes of Cloak & Dagger. It was very well done, and I'm glad to see that it's been renewed for a second season. At the end both heroes had come into their full powers. The tease at the end seems to set up the return of Brigid O'Reilly as Mayhem.

Season 2 is scheduled for April 4.

Wow, I completely forgot this existed. I don't have Hulu, but I'll have to remember to check this out if we ever decide to subscribe.

It can be watched on Hulu, but the broadcast channel is Freeform, formerly called ABC Family. It should be on cable as a free channel. Season one might be an On Demand offering from ABC.

A reminder that Cloak and Dagger returns this coming Thursday, April 4, on the Freeform cable channel.

I recently finished the first season on Hulu. I have zero history with the characters, but I liked it. Looking forward to the second season.

I think the two leads are very good -- which they'd have to be for this to work.

I watched the two-hour premiere, and also liked the switch they pulled on Mayhem. If they hadn't changed it up, they'd be accused of ripping off Typhoid Mary in Daredevil.

I haven't had a chance to watch to premiere of season 2 yet. I also have zero history with the characters except for the show.

I recently finished the first season on Hulu. I have zero history with the characters, but I liked it. Looking forward to the second season.

But what’s really exciting for TV viewers are the team-ups the pair have had with other teen-angst super-teams like The Runaways and the New Mutants. While the stars would have to align just right – New Mutants is a Fox movie property, and Runaways is on Hulu – one can imagine the Cloak & Dagger team salivating at the prospect of adapting one of those comic book crossovers to the small screen.

Thanks to the Disney company buying many of Fox's assets, including its TV and movie production arms, a crossover with the New Mutants is within the realm of possibility.