I used to be a huge fan of the comic strip Dilbert. I found it to be funny and inventive. Eventually, however, it seemed to me that it fell into the same pattern that many successful comic strips fall into. That is, Scott Adams developed a stable of jokes and situations that he would cycle through periodically, dressing them up slightly to keep it from being too obvious.

The strip spawned an animated series that ran on UPN from January 1999 - July 2000. I don't suppose that  it will go down in history as the greatest piece of animation ever made, but it had its moments.  Be that as it may, I have the whole series on disk, and have decided to break it out and watch it again.

Plot:  Dilbert is charged with naming his company's new flagship product, hampered by the fact that he doesn't know what it is.

Ratbert (voiced by Tom Kenny), a rat that lives with Dilbert and Dogbert

Alice (voiced by Kathy Griffin), an engineer who works with Dilbert, very short-tempered

Wally (voiced by Gordon Hunt), an engineer who works with Dilbert and Alice, lazy and cynical

Loud Howard (VOICED BY JIM WISE), LOUD HOWARD IS LOUD. THAT'S HIS WHOLE CHARACTER. A minor character in the strip that got promoted in the animation

The Dilmom (voiced by Jackie Hoffman),Dilbert's less than supportive mother

Overall: An OK debut. There's a scene with a voice-activated shower which as fairly amusing.

I vaguely remember that show. I think I saw it only once. I recall reading an article around the time it debuted describing how the animators had to translate the very static comic strip into something with movement.

One challenge was that in the newspaper strip, Dilbert doesn't have a mouth, so the animators needed to provide him with one to show him speaking.

You know, I never thought about that.

I suspect that Loud Howard became a semi-regular because jokes about loudness work better in a medium with sound.

I've followed the comic strip for years. Currently I'm reading the new strips as they come out and the "classic" strips, which are also daily. In our office years ago one or two of the bosses would enjoy the strips without recognizing themselves.

I vaguely remember the animated version. I watched it a couple of times and didn't stick with it.

I liked the opening of the animated show.  The music matched the animation and set up the situation.

Plot: Dilbert and Alice must compete against a rival engineer.

I never saw the show but I did read the box set that cam out a couple of years ago. I was surprised how long the strip existed before settling in on its "office" theme. Hadn't known the story behind Dilbert's curled tie prior to that,.

I think shows like this and Pinky and the Brain when that was moved to prime time are the networks way of looking for their own version of the Simpsons.

Plot:  Dilbert's colleagues become convinced that a competitor is working on a similar product to theirs.

Overall: Another OK episode. Interesting twist as Dilbert goes to work for a well-run company and can't stand it.

Plot: The prototype for the new product enters the testing phase. Meanwhile, Dogbert goes for a ride on the space shuttle.

Overall:  Another OK episode, in which the two plotlines dovetail nicely together.

I love Dilbert! Never realised there was any animated stuff about - it probably it never made it to the schedules, this side of the pond. I guess (like everything else) it's now on youtube. I have 100's of cartoon strips.Here's one of my favourites. 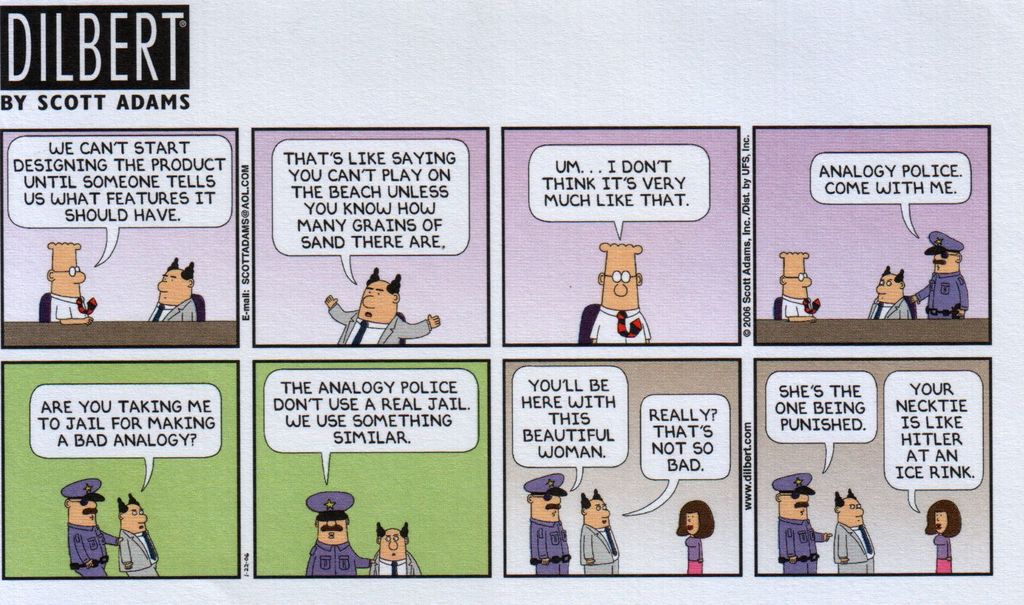 Interesting. the bit about designing the product without knowing the features is similar to the first episode of the animation.