There were some off-screen issues as well. Hartley Sawyer got himself fired over a mess of foul tweets he had the lack of judgment to post, so somehow, they've got to write Ralph Dibny out of the show. Danielle Panabaker was pregnant, and they didn't write it into the story -- they had an ailing Frost spend a lot of time sleeping on the couch before she went away with Caitlin's mother -- and she had her baby April 2. (So far as I can find, she and husband Hayes Robbins haven't announced the baby's name, or even if it's a girl or boy.)

However, the delay helped get Cisco and Frost back into the mix earlier (see here), as Panabaker completed her maternity leave during the hiatus.

In the Season 7 premiere, unfortunately, Iris is still trapped in the Mirror dimension, a story they need to wrap, and soon. Consequently, they are still dealing with Eva, who kills Sam Scudder, and makes a chilling discovery about herself at the end: She's a mirror doppelganger, not a person, because the human Eva died six years ago when she was thrown into the mirror during the infamous particle accelerator explosion (the gift that keeps on giving). No wonder Joseph Carver kept arguing Eva is not his wife.

But the biggest thing in the episode: The effort to finish the artificial Speed Force runs into a snag, and the only way to make it work requires Nash Wells to make The Ultimate Sacrifice. (*sob*)

Before we get there, Nash gets a visit from The Council of Wells, through some sciency mumbo-jumbo to explain how they can still be around even though their worlds were destroyed in the Crisis on Infinite Earths. And the attempt to make the artificial Speed Force operate accidentally causes The Council of Wells to get infused into Barry (explained through more sciency mumbo-jumbo). Seeing Grant Gustin impersonate the various personae of Wells was a lot of fun.

So Tom Cavanaugh played a scene with all of the Council of Welleses, and Candice Patton faced off against a variety of her own mirror duplicates. That's one way to shoot a scene during Covid safety protocols -- have one actor play all the parts.

Thanks for the recap, Kelvin. I watched the season seven opener but, after the hiatus, I needed it!

Yeah, I had completely forgotten about some of those dangling plot threads! Didn't even miss them when I watched the opener. 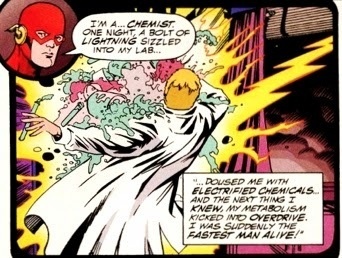 I was twelve when Barry Allen had the chemical reaction.

Imagine that happening to me! I was such a diehard fanboy that I went to our second floor bathroom and began mixing up a bunch of medicines. Then I would drink it and become a superhero!

But the potion smelled so bad,  I just couldn't drink it.

Mom told me that it was poison, could've killed me!

So glad I'm all grown up now.

I've caught up to what was likely planned as the season 6 finale -- the end of the Mirror Monarch storyline, Iris's return, etc. And...

Can I just say I never want to hear Barry refer to himself as the Paragon of Love ever again? Even for a show that's all about your feelings being the REAL superpower, that's pretty hard to stomach. I'm all in for Barry & Iris, but I'd really love for there to have been a pseudoscientific reason why she was the repository for the Speed Force, not just "I love her sooooo much, guys!"

Interesting how they've chosen to reintegrate Ralph onto Team Flash.

I think this was a stopgap until they could get the role recast. For a while, it seems like Ralph and Sue will be globetrotting; I imagine we'll see them again later in the season.

That's my impression too. No doubt that when that goop comes off, Ralph will look like someone else.

I don't understand, though, why they went so far out of their way to eliminate all of the versions of Harrison Wells, bring back the original Harrison Wells -- who, oddly, we never actually saw throughout the run of the series -- and get rid of him almost immediately.

What's up with that?

I feel like it was a way to give Welles a happy ending at the end of the season. A lot of these three episodes have felt herky-jerky, and I think it's a combination of the covid gap in filming, covid protocols causing rethinks, the need to write Ralph out for a while (and write around his planned part in the finale) to give them time to recast, and the cognitive dissonance of watching the last beats of a story as the opening episodes of a new season. Everything's weird and inexplicable, and there's not a lot that's landing quite right.

True. These three episodes were really the conclusion of Season 6, not the opener of Season 7.

How about that surprise at the end of last night's episode, hey?