What is the Earliest Multiverse Story?

This article from the blog at DCComics.com identifies the story in Wonder Woman #100 (AUG58) as the first multiverse story:  "The Forest of Giants!/The Challenge of Dimension X" (16 pages) featuring an identical twin of Wonder Woman.

Just after that, 10-year-old me picked up two consecutive issues of Adventure Comics off the spinner rack. Adventure Comics #252(SEP58) and #253(Oct58) had the first and second parts of a continued Green Arrow story (12 pages in all) illustrated by Jack Kirby. Enormous arrows are investigated by Green Arrow and Speedy. It turns out that they were shot through a comet-caused (those pesky comets) dimensional gateway by the child (!) of a giant alien counterpart of our Green Arrow (dressed exactly like him).

Were there any multiverse stories before 1958. In DC comics? In other comics?

It turns out that the DC article is incorrect. An earlier issue of Wonder Woman establishes the multiverse concept. This is a story that is canon.

The Hollywood Reporter actually came up with the issue number, but only had a paragraph and no illustrations.: 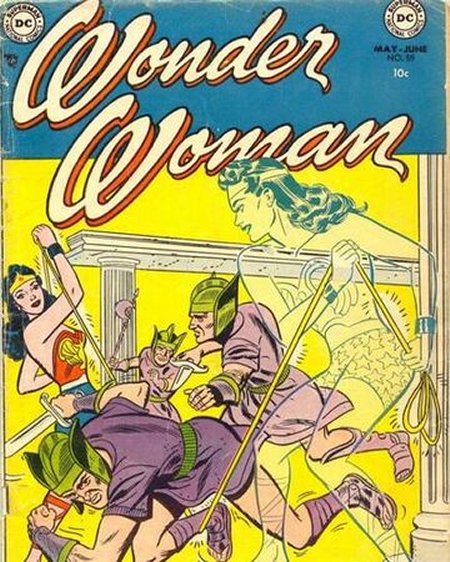 When I googled it I found this article from Comic Book Resources which provides great detail.

Tracy of Moon-T replied to Jeff of Earth-J's discussion Swamp Thing
"Reading these along with Jeff is interesting because he picks up on different hints and such.…"
7 minutes ago

Philip Portelli replied to Steve W's discussion A Cover a Day
"From George's last year of his first stint at Marvel! "
46 minutes ago

Jeff of Earth-J replied to The Baron's discussion Movies I Have Seen Lately
"END OF THE WORLD (1977): "A scientist discovers signals from space that appear to carry…"
1 hour ago

Jeff of Earth-J replied to Randy Jackson's discussion Ketchup/Catsup - Refrigerated or not
"If I use a tomato-based condiment at all, I use steak sauce. It tastes better on hamburgers, on…"
2 hours ago

MethodEng replied to Jeff of Earth-J's discussion Seduction of the Innocent
"Is it accepted that the Comics Code came about because of Wertham's book. Or was there already…"
11 hours ago