When DC was weird

This post is just a bit past the Silver Age, but I think appropriate for Oct. 31.

Back about 1971-1972, as the Comical Code Authority was starting to loosen up, someone at DC Comics (probably Joe Orlando) came up with the idea that putting the word "weird" on the cover was a sure way to sell comics, just as gorillas, purple covers and someone crying were thought to sell extra copies during the Silver Age.

The easiest way to do that was to p 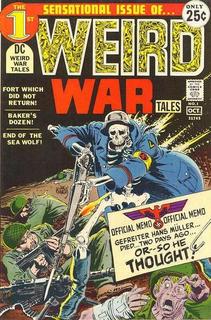 Somehow they missed Weird Detective and Weird Love, and I probably would have bought that last one. 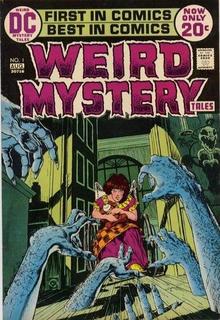 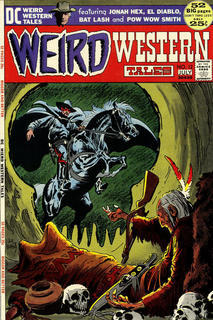 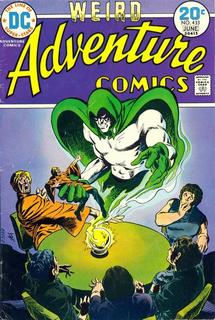 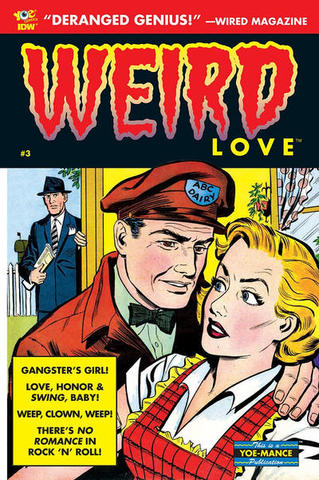 Yeah, that's a little past my prime, but I know those have some fans around here. And that Weird Western Tales looks pretty promising. I actually bought the Weird Worlds and Weird Adventure, but I had a feeling they weren't long-term titles.

But take heart: Issue #3 of Weird Love is on the stands now, so it's not too late to complete your collection!

...Back then , I fantasized DC bringing back a certain much-beloved DC series by trying - Well , let me describe the cover I imagined:

A gigantic little girl , maddened expression , bursting through a many-metal-seperated panes window on a dark and stormy night to the confoundment of a normal-sized little boy inside:

I am happy to say I have all of Weird Western Tales issues that featured Jonah Hex, which is where he debuted. I even have some of the ones he wasn't in. A lot of those horror anthologies are quite disposable, but Weird Western Tales had top artists working on it -- Tony deZuniga, Neal Adams, Gil Kane, to name a few.

I also enjoyed Weird War Tales, and miss it.

I really liked Weird War Tales, especially the earlier issues when it wasn't so World War II centric. I still liked the later issues, just that those weren't quite as good. Then when the Creature Commandos and G.I Robot became the regulars, I thought it got good again as you actually had some recurring characters to get invested in.

Most of my Weird Western Tales experience was from the Jonah Hex Showcase and that was really solid as well.

Weird War Tales was a blast... I love picking up a back issue of that from a cheapie bin every now and then.

I've got all the Weird Western Tales, too -- I probably picked it up for the Neal Adams art on El Diablo, but I don't really remember. I do recall that I stopped buying it one issue before Jonah Hex debuted, and started reading it again three issues into his run, and getting those three in the middle took me a loooooong time!

Meanwhile, I was actually excited about Weird War Tales, but the execution was kinda meh. I kept on longer than I did WWT, but eventually I dropped it out of boredom. I wasn't around when those later features came along, but maybe the Showcases will get me there.

And I LOVED Michael Fleischer's Spectre in "Weird" Adventure Comics!* Especially since the features that preceded it bored me to tears. And I knew it was just an exercise in "how can we kill these crooks in really creative/ironic ways?" But knowing that actually helped, in that I didn't expect much in characterization or continuity. I just tuned in each issue to see what awful thing the Spectre was going to do next! For what it was, it was done well.

One more thing: Martin Goodman was famous for believing that what sold a comic book was its title -- not the cover, certainly not the contents. And he favored certain words which he felt sold books. For example, he loved the word "Kid" for Western characters, so just about all of them were kids of one kind or another.

So it's interesting that here DC was playing the title game, while it's largely fallen off for Marvel. But there is one word that Marvel still loves, and slaps on to every title it can:

* You know, I don't believe the word "Weird" was ever formally added to Adventure Comics. It may have been "Weird" on the cover, but it was plain, old Adventure Comics in the indicia.

Of course, Marvel got into the act with WEIRD WONDER TALES. And apparently had a title that was originally going to be called WEIRD HUMOR TALES, then got renamed ZANY before it ultimately debuted as PLOP!

I presume you left the "DC" out of your second sentence. There were several of those attempts then, with Marvel doing ARRGH!? I wish they'd had a longer life. PLOP! lost a lot of its shine, though after a few issues, I think.  I imagine those are really tough to do, because comedy is hard, but I've always liked them, right up to the What Th? one Marvel did recently.

Marvel briefly revived the name Crazy with reprints of Not Brand Echh! before turning Crazy into a magazine. I only saw one issue of ARRGH! and all I remember is horrible things happened to the characters in it at the end (so they could yell ARRGH! no doubt, like Plop! stories ended badly so they could say the characters' lives went Plop!)

I believe Weird Love was a joke title for a few years before it was actually published. The company that made Tales too Terrible to Tell used the cover of #2 for their own title, My Terrible Romance, with different dialogue. Now, where's that Weird Detective title? 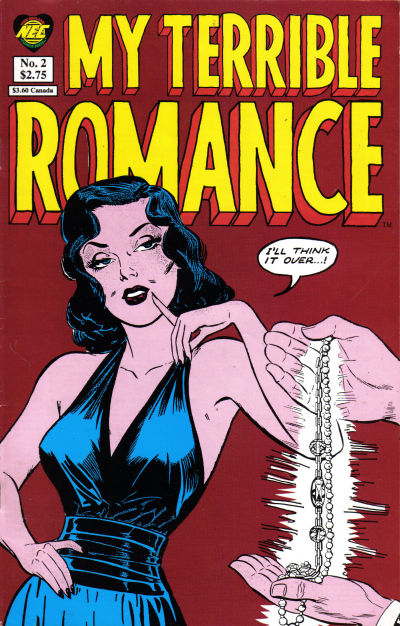 I presume you left the "DC" out of your second sentence. There were several of those attempts then, with Marvel doing ARRGH!? I wish they'd had a longer life.

Marvel briefly revived the name Crazy with reprints of Not Brand Echh! before turning Crazy into a magazine. I only saw one issue of ARRGH! and all I remember is horrible things happened to the characters in it at the end (so they could yell ARRGH! no doubt, like Plop! stories ended badly so they could say the characters' lives went Plop!)

As I remember, AARGH! ran for five issues, but the first two were all-new material and the last three were reprints from 1950s Timely comics, which weren't half as interesting.

As I remember, AARGH! ran for five issues, but the first two were all-new material and the last three were reprints from 1950s Timely comics, which weren't half as interesting.

I liked the reprints, though, as I've always been intrigued by all those Mad wannabes that were flooding the market then, and few of them have been reprinted any where (except for at least some of the A&E issues, which were pretty good). I have a few issues including at least one of Insane, Get Lost (the A&E flagship), Whack and Yak Yak, but they are really hard to find.

I grant that they aren't all hilarious, one of the key reasons they didn't last long, but I like seeing the pop culture they do (Universal monsters was a favorite) and how hard they work to be funny. That stuff has always appealed to me, probably because I started reading MAD when I was about eight years old and I was fascinated by the satires Stan ran in the backs of Annuals. So I scooped up NBE quickly. That I only have a few issues of PLOP! (but all but one reprint issue of ARRGH!) probably says something.

The Baron replied to Wandering Sensei: Moderator Man's discussion What Comic Books Have You Read Today?
"Over the weekend, I re-read the first ten volumes of Hakumei & Mikochi: Tiny Little Life in the…"
2 hours ago

Richard Willis replied to Jeff of Earth-J's discussion T.H.U.N.D.E.R. Agents
"FYI, I just noticed that the Two Morrows THUNDER Agents Companion was published in 2005.…"
2 hours ago

Jeff of Earth-J replied to The Baron's discussion Movies I Have Seen Lately
"GOLDEFINGER: Ditto."
2 hours ago

Tracy of Moon-T replied to The Baron's discussion Movies I Have Seen Lately
"As the guy who stole the plane said, "I don't like it." Well, dude, me either. …"
4 hours ago

Jeff of Earth-J replied to The Baron's discussion Movies I Have Seen Lately
"THEY (1974): "A group of campers in the Canadian wilderness begins to hear strange reports…"
4 hours ago

Fred W. Hill replied to Jeff of Earth-J's discussion The Pre-Defenders
"Ah, I forgot that little detail.  Considering that when Subby & the original Human Torch…"
6 hours ago

Richard Willis replied to Steve W's discussion A Cover a Day
"It turns out that I have three covers left, not two. So I'm posting today after all."
6 hours ago

Richard Willis replied to Steve W's discussion A Cover a Day
"The short red hair is a tribute to Mia Farrow in Rosemary's Baby."
6 hours ago