You think 'WandaVision' is weird? Check out the comics that inspired it 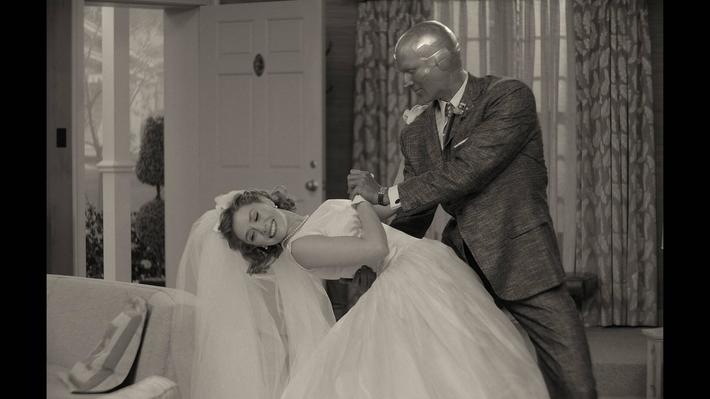 Jan. 21, 2121 — WandaVision is delightfully strange, isn’t it? But, believe it or not, the comics that may (or may not) have inspired it are even weirder.

Take the Vision. Unlike most superheroes, you can’t sum up his origin with a single phrase. He wasn’t rocketed to Earth from a doomed planet, for example, or bitten by a radioactive spider. His origins are weirder and, moreover, refuse to remain static.

This part has always been true: Vision is a “synthezoid,” an advanced android, who first appeared in Avengers #57 in 1968. Just like in the movie, he was built by the murderous artificial intelligence Ultron, who ordered him to kill the Avengers. As we all know, he joined the team instead. Voila! Origin!

It was in the following issue that Vision learned that his “brain patterns” were those of Simon “Wonder Man” Williams, who was dead at the time. (He got better.) Wonder Man had died back in 1965, and the Avengers stored his brain patterns because, um … well, they did, that’s all.

And there’s more! In 1975 Vizh (his friends call him Vizh) learned that his body was that of the original Human Torch, who, despite the name, was actually an android superhero in the 1940s. That was back when Marvel called itself Timely Comics, and the android Human Torch was a pretty big player … until he got himself killed in 1966.

And, yes, he got better. Because in 1999 Vision learned that he wasn’t using the Torch’s body, but was instead using a divergent Human Torch body created by the supervillain Immortus in a scheme to keep the Scarlet Witch childless.

Don’t ask me to explain this part unless you have an hour to kill. Vision, of the Avengers, once built an android family and tried to live in the suburbs. All the characters had names that started with a “V” except for the dog, who didn’t have a name. (Cover art by Mike Del Mundo, copyright Marvel Comics)

Speaking of the Scarlet Witch, she also has a convoluted back story that keeps changing every few years. It all started in The X-Men comics in 1964, when she and her fraternal twin brother first appeared as members of Magneto’s Brotherhood of Evil Mutants.

When it comes to Quicksilver (real name Pietro) and Scarlet Witch (Wanda), though, we were immediately told that they were reluctant mutant terrorists, which, I guess, makes it better? Anyway, we learn, via flashback, that the only reason they follow Magneto is they owe him a debt: When they were poor, super-powered mutant orphans in Eastern Europe, they were chased by mobs of 1800s-style, torch-and-pitchfork-bearing villagers straight out of Frankenstein. Because Wanda, you know, was kinda witch-like, and in Marvel Comics, Eastern Europe apparently gave the 20th and 21st centuries a pass. Magneto saved them from the mob, so they agreed to work for him.

Eventually they got fed up with the Big M, though, and took their act to the Avengers. At the time, the team seemed like a Supervillain Reform Society, so they fit right in. Their super-powers were super-speed (Pietro) and “hexes” that caused bad luck (Wanda), which were good enough on a team where Hawkeye was the star.

“But,” I hear you say, “Who were Wanda and Pietro’s parents?” The only reason I’m going to answer that impertinent query is in order to transfer to you the headache I get when thinking about it.

In 1974, the 1940s, yellow-clad superhero The Whizzer (stop laughing) shows up — and claims that he and 1940s superheroine Miss America (I mean it, stop) were the parents of Wanda and Pietro. It made sense after a fashion, given that he was a super-speedster like Pietro, even after he told them a wild story of the birth taking place on Wundagore Mountain in Transia, which was the home base of the High Evolutionary, a long-running supervillain whose hobby is evolving animals into people. The midwife, for example, was a cow-woman named Bova. (OK, now you can laugh.) 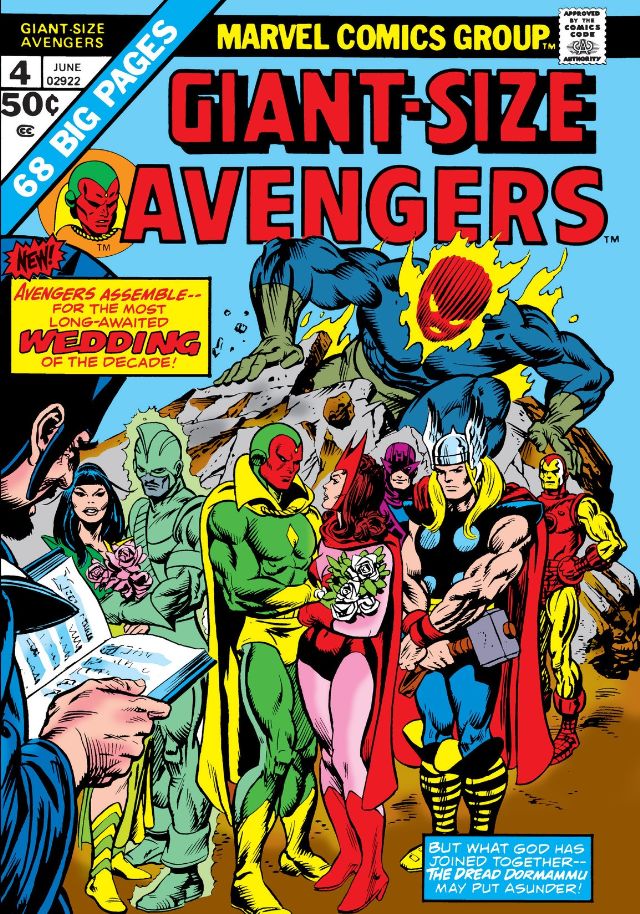 Wanda and Vizh got hitched in a double ceremony officiated by a time-traveling being named Immortus, who is the future self of Avengers supervillain Kang the Conqueror, and possibly the father of Reed "Mr. Fantastic" Richards of the Fantastic Four. As to the other couple, the bride was a Vietnamese prostitute with empathic abilities who turned out to be the Celestial Madonna (whose child is destined to save the universe), and the groom was the corpse of a dead Avenger named The Swordsman, which was inhabited by the spirit of a dead alien tree-being. Oh yeah, the guy coming out of the ground on this cover is Dr. Strange villain Dormammu, a primordial inter-dimensional entity who is the ruler of the Dark Dimension. WandaVision may be weird, but it's not yet this weird. (Cover art by Gil Kane, copyright Marvel Comics)

He goes on to say that his wife Madeline died in childbirth, and he fled in grief, leaving Bova to hand the kids over to two Romani to raise.

But that didn’t stick. In 1979, Django Maximoff, a puppeteer from Eastern Europe, says he and his late wife Marya were the two Romani in The Whizzer’s story, and that they were the actual parents. The kids were originally named Ana and Mateo, he says, but they went with Wanda and Pietro because … uh, well, it’s not a very good story and none of the Avengers really believe it.

But then there’s some folderol with magic puppets — in comic books, puppets are always secretly alive, so never take your eyes off the little buggers — resulting in Wanda getting possessed by an ancient Elder God named Chthon.

OK, let’s back up: Chthon is one of those scary Lovecraftian creatures who had been imprisoned by Morgan le Fay during the time of King Arthur in Wundagore Mountain, and was still hanging around (invisibly) when Wanda got born, and saw an opportunity to use this mutant baby as a conduit for escape by infecting it with black magic.

Still with me? OK, back to the present: The Avengers kicked the Elder God out of their teammate, as you do. But this adventure had the twin consequences of A) Wanda became revealed as a witch as well as a mutant, capable of reshaping reality, and B) Django dying.

Which is a good thing, because four years later Magneto drops in to announce that Django and Whizzer were both wrong, and he is the father of Wanda and Pietro. This makes even more sense, especially since he and Pietro have the same hair color. And they’re all, you know, mutants.

His story is that his pregnant wife Magda ran away to Wundagore Mountain, and died giving birth at the same time Madeline died giving birth, and all the babies are dead except for Wanda and Pietro, whom the cow-woman gives to Django and Marya.

Man, it was a busy night on Wundagore Mountain!

But by 2008 Marvel was making movies, and didn’t have the rights to mutants and/or X-Men, which belonged to Fox at the time. And Marvel wanted to use longtime Avengers Quicksilver and Scarlet Witch — whom the perceptive reader will note were never in the X-Men – so the studio needed them to not be mutants.

And suddenly they were not.

In 2015, the Avengers took on the High Evolutionary again, who ‘fessed up that he had kidnapped Wanda and Pietro in Serbia, tinkered with their genes, didn’t like how they turned out, and then gave them to Django and Marya to raise. They weren’t mutants at all! How convenient for the Marvel Cinematic Universe!

Then in 2016, Wanda found out that, while Django and Marya weren’t her birth parents, Marya was still alive — and fingered her sister Natalya as Wanda’s real birth mother. This was awesome, because it finally introduced a woman in all these stories whose name didn’t start with “M.” But also because it established that Natalya was also a prototype superhero … named Scarlet Witch.

So Wanda is not only a non-mutant sorcerer, she’s the latest in a long line of heroic witches. That doesn’t really explain her brother, but nobody cares, because he’s a jerk in the comics and dead in the movies. 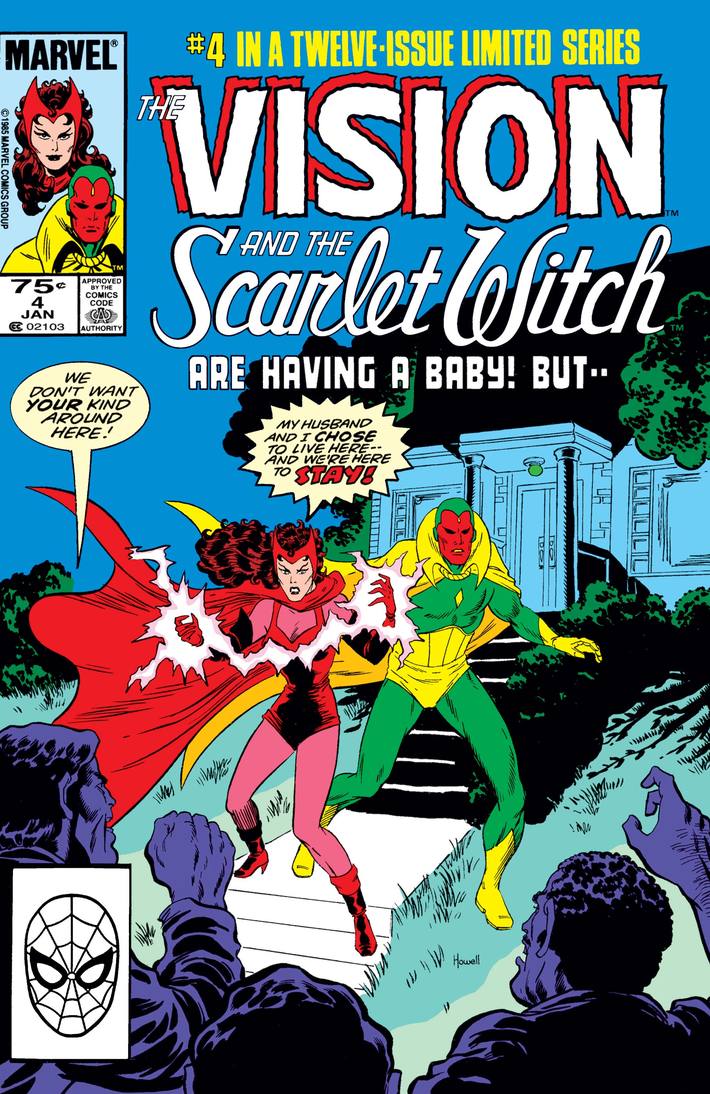 Back in the '80s, Wanda and Vizh were married and living in Leonia, New Jersey, where the neighbors had evidently been watching Frankenstein movies. (Cover art Richard Howell, copyright Marvel Comics)

And what does this have to do with “WandaVision”? Well, in the first place, it shows just how malleable the histories of these two characters are. The show can do just about anything, and explain it away with Elder Gods or Whizzers or magic puppets.

In the second place, we’re only scratching the surface of the weirdness that is Wanda and Vision — together or separately. For example:

See anything in these stories that might apply to WandaVision? How about "Wanda is mentally unstable" or “nothing is ever as it seems” or “Vizh and Wanda really want to live in the suburbs”?

The other thing to keep in mind, if indeed any of these stories are the inspiration for WandaVision, is this: None of them ever end well.

Brilliant recap, Cap! Brilliant that you even could recap that.

It's almost as if various Marvel writers were making it up as they went along.

Excellent recap. How many bottles of headache medicine did you have to take before you got to the end?

Excellent recap. How many bottles of headache medicine did you have to take before you got to the end?

No aspirin, but a lot of beer was involved.

Seriously, I enjoyed it. Well, mostly.

I generally like convoluted continuity, but when it got to the point Marvel decided Scarlet Witch and Quicksilver weren't mutants anymore, that's where i drew the line. I like to refer to such stories as WINH (Wrong! It Never Happened!") stories. Uh, uh. No way. Not on Earth-J.

I just read TVLine's review of WandaVision episode 5. It convinced me to subscribe to Disney+

recently finished WandaVision loved it, but found myself pausing it and explaining stuff to my other half from the comics as she doesn't read comics, I'm 53 so been reading comics a long time but forgot about visions body being the original Human Torch

Aren't Wiccan and Speed reincarnations of Wanda and the Vision's "children"? Or was that retconned away, too?

Aren't Wiccan and Speed reincarnations of Wanda and the Vision's "children"? Or was that retconned away, too?

That depends. Is this an odd or even day? And when does the new moon appear this month?