Permalink Reply by Jason Marconnet (Pint sized mod) on June 1, 2009 at 9:17pm
When I was a kid I got a hold of Superboy Annual #1 from 1993 or 1994. It was the second part of an Elseworlds story. I finally got the first part from Adventures of Superman Annual whatever the number was about a month ago. That Superboy issue is still one of my favorite comics. It's about an alien invasion that hit earth and there are only a handful of heroes left after 10 years to make a final stand.

Recently, the Avengers the Initiative Annuals have been good. They've revealed more about the new characters that have been introduced in the series.

Ultimates 2 Annuals 1 & 2 have both been good, this was a few years ago. The first one was all about a day in the life of Ultimate Nick Fury, or maybe a week in the life. Anways good stuff. The 2nd annual was about Captain America and the Falcon on a cross country trip cleaning up the mess after the 2nd story arc in Ultimates 2 (it's funny because the 2nd arc hadn't concluded yet). It was a fun story if I remember correctly. It put a slightly different spin on the Cap/Falcon relationship.

Finally, one of my biggest back issue finds ever Amazing Spider-man Annual #21. The Wedding of Peter Parker and Mary Jane Watson, a classic.

This one blew my mind as a kid, and sent me scrambling for a copies of Bulfinch, Hamilton and any other references on Norse or Greek mythology.

Permalink Reply by Rob Staeger (Grodd Mod) on June 1, 2009 at 9:35pm
Probably my favorite Annual is Legion of Super-Heroes Annual #1. To me, reading this annual was when I realized just how good the Levitz/Giffen team was. Lots of suspense, lots of action, lots of characterization -- and it introduced Jacques Foccart, one of my favorite legionnaires -- as well as the return of Shvaughn Erin, who would go on to much greater prominence in the series. 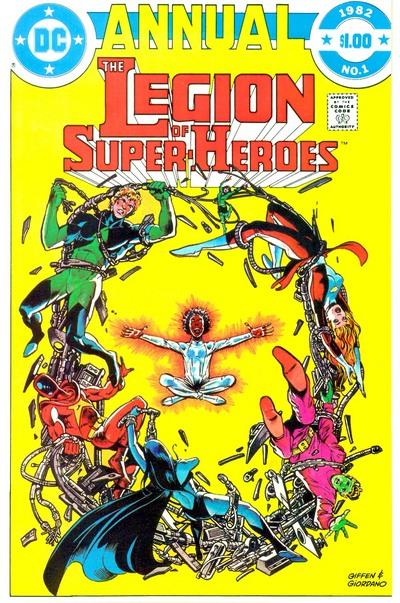 Permalink Reply by Travis Herrick (Modular Mod) on June 2, 2009 at 6:32pm
One of most well-read comics. I think I even tried to "jazz" up the logo by drawing on it.

Permalink Reply by Chris Fluit on June 6, 2009 at 1:06pm
Some of my favorite Annuals come from New Teen Titans. I loved the way in which big stories like "The Judas Contract" and "Starfire vs. Blackfire" were finished up in the Annuals.

Permalink Reply by Jeff of Earth-J on June 6, 2009 at 9:44pm
Fantastic Four Annuals #1-6 are the standard by which all other annuals are measured.

Permalink Reply by Wandering Sensei: Moderator Man on June 7, 2009 at 2:46pm
The 1998 Fantastic Four Annual really stands out to me as a fantastic story that just beautifully ties everything that's wonderful and unique about the Fantastic Four together in a "kind of" alternate history for the FF.

Also, I remember the Secret Origins Annual featuring the Teen Titans, which felt so extremely comprehensive to me, even though I knew so little of the characters. It made me want to find every issue featuring every story in that book.

Permalink Reply by doc photo on June 9, 2009 at 8:44am
The Flash Annual/80 Page Giant from 1965 reprinting "Flash of Two Worlds". That issue made me a Flash fan. Not only did you get the seminal Earth One-Earth Two story but it also included several tales featuring various Rogues Gallery favorites like Grodd and Dr. Alchemy.

A close second would be the 1977 Avengers/Marvel Two in One crossover annuals in which Jim Starlin wrapped up his original Warlock saga. Starlin hit his peak as writer and as artist with that one.

the 1977 Avengers/Marvel Two in One crossover annuals in which Jim Starlin wrapped up his original Warlock saga. Starlin hit his peak as writer and as artist with that one.


Ooohh, those were good. I'd forgotten about that wrap up.

Ooohh, those were good. I'd forgotten about that wrap up.


You've got that right! As much as I love Starlin's work from that period I don't much care for what followed.

My favorite part of Marvel's early annuals were the extras after the main story. Encyclopedia like pages of Mole Man, Skrulls, Namor, Dr. Doom, etc., details of the Baxter Building, a special page on each of the heroes (with info like Mr. Fantastic can stretch a maximum of (I think) 75 yards on a good day. And of course the first Silver Surfer story, with the page of him making Quasimodo humanoid so popular they made a black light poster and a jigsaw puzzle of it. "Thus, you shall suffer no longer!" "I'm changing...changing!"